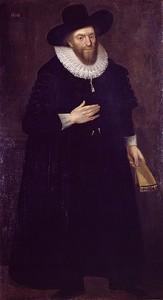 Most of what we know about the elusive world of Elizabethan and Jacobean theatre is found in one unique collection of manuscripts. These are known as the Henslowe-Alleyn archive, working theatrical documents created by impresario Philip Henslowe and his illustrious son-in-law, actor-manager Edward Alleyn. While the records of most theatre companies were lost, Alleyn’s were deliberately preserved as part of  Dulwich College.

These documents have been pored over by scholars searching for information about Shakespeare since at least the eighteenth century, though ironically the documents contain hardly a single reference to him. Facsimiles and transcripts of the most important sections were published decades ago, but in the past few years the documents have been digitised and now several thousand pages are freely available for anyone to consult at the website.    There are plans to make these even more accessible, but already the site contains more than a dozen essays explaining the documents and their importance.

On Tuesday evening Peter Jolly from Dulwich College spoke to the members of Stratford-upon-Avon’s Shakespeare Club about the history of the collection and how the documents relate to Shakespeare and the world of Elizabethan theatre. 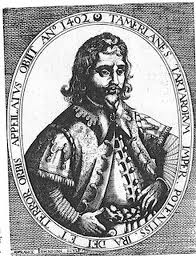 Dulwich Collegewas founded in 1619 through Edward Alleyn’s purchase of a tract of land in South London for which he paid the immense sum of £35,000. Alleyn’s money came from a combination of his inheritance of Philip Henslowe’s fortune and his own earnings as the most talented actor of his day, creating sensational roles including Marlowe’s Tamburlaine. The documents, kept in their own chest, were part of his gift to the college he set up to educate scholars from several specific parishes in London.

Peter Jolly explained that the documents that form the collection give us information about all aspects of theatre administration. There is the contract for the building of the Fortune Theatre, a play manuscript, and an actor’s part (Alleyn’s for Orlando Furioso).

The Plat or Plot for the second part of The Seven Deadly Sins is a document placed backstage during the performance to remind actors of the running order, and is rather reminiscent of the scene breakdown and availability charts found in modern prompt books. 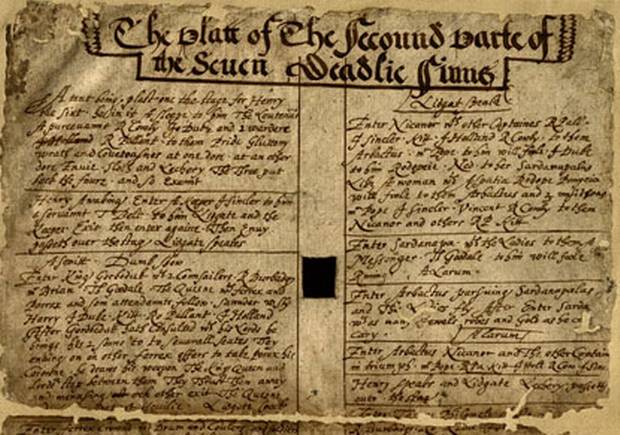 Then there is what is known as Henslowe’s Diary itself, not actually a diary but an account book relating to the Fortune and Rose Theatres run by Philip Henslowe. One of the most engaging items is the inventory which lists items of theatrical costume, some of which can be linked to particular plays or actors.

It has not escaped the perils that have affected most Shakespeare documentation. In the eighteenth century people removed items from the collection which have since turned up elsewhere including the British Library, the Bodleian and Folger Shakespeare Library. The one Shakespeare item known to be in Alleyn’s collection was a copy of the 1609 Sonnets quarto, but sadly this book has never been found. Documents in the collection have also been subject to forgery, Payne Collier adding Shakespeare’s name in at least one place.

During his theatrical career Edward Alleyn was the most famous of actors, but is now little remembered. The speaker suggested that the lack of interest in Alleyn is because there is no mystery associated with him. His life was well documented, sensible, and with no criminal involvement. In addition the plays in which Alleyn starred have not continued to be performed and studied to anything like the extent that Richard Burbage’s roles of Othello, Hamlet and Lear, written for him by Shakespeare, have.

Peter Jolly ended by showing us the poem written by Ben Jonson about Alleyn, similar in structure to that he wrote about Shakespeare. It’s a fitting reminder of how much playwrights and actors both depend on and challenge each other.

It ends:
‘Tis just, that who did give
So many poets life, by one should live.