Farewell to the majestic cedar 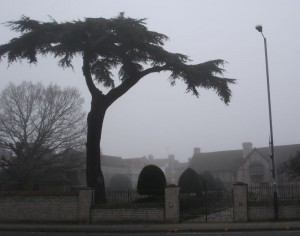 It’s sad to report that the Cedar of Lebanon tree which stands in the garden of Shakespeare’s Birthplace has to be taken down later this week. It’s a real focal point of the garden, forming the backdrop for countless photographs, and  must have been seen and admired by millions of visitors over the years.

Several attempts have been made to date the tree, unsuccessfully, as in spite of the many images in the Shakespeare Centre Library and Archive, none of them show it as a young tree, and there is no record of its planting. These trees were first brought into the UK in the mid-seventeenth century, but the height of their popularity was in the eighteenth century when every country house planted at least one in their gardens, many still to be seen today. Now standing at 15.5 metres tall, it’s estimated that the tree is probably around 200 years old, but ironically it will only be possible to date the tree accurately after it has been felled. 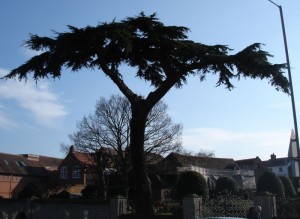 The cedar tree appears in classical and biblical texts as a symbol of power and majesty, and Shakespeare refers to it several times. In Cymbeline, a written tablet left with Posthumus is interpreted, prophesying good fortune:
The lofty cedar, royal Cymbeline,
Personates thee: and thy lopp’d branches point
Thy two sons forth; who by Belarius stolen,
For many years thought dead, are now reviv’d
To the majestic cedar joined; whose issue
Promises Britain peace and plenty.

And in Henry VI Part 2, the mighty Earl of Warwick suggests his family, represented by its crest, has the endurance and strength of a cedar tree:
Now by my father’s badge, old Nevil’s crest,
The rampant bear chain’d to the ragged staff,
This day I’ll wear aloft my burgonet,
(As on a mountain top the cedar shows,
That keeps his leaves in spite of any storm.) 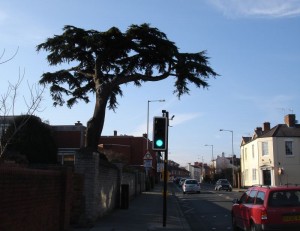 It really is that close to the main road

Unfortunately the tree in the Birthplace Garden has been in decline for some years. It first shed branches in 1949, and just in 2007 a major branch fell off the tree, miraculously happening early in the morning before anyone was in the garden. This would probably not be the case if any of the remaining branches were to fall as they have grown out over Guild Street, the extremely busy A3400, which carries much of the through traffic in the town. It will be a sad day for everyone when this once-beautiful historic tree is cut down, and it will be greatly missed.

2 Responses to Farewell to the majestic cedar