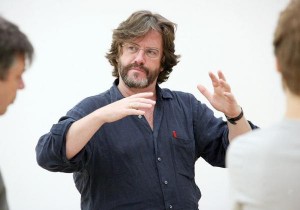 Today Gregory Doran (universally known as Greg), has been appointed as the new Artistic Director of the Royal Shakespeare Company, the most important job in the world of Shakespeare. Those who have been watching Greg for the last two decades will know that after more than a decade of upheaval for the company, the performance of Shakespeare’s plays will be at the top of his list. Here’s a link to The Stage’s article.

Greg has been an actor as well as a director and worked his way up the company gaining the respect of theatre professionals, academics and audiences. Although he can’t avoid being seen as the predictable candidate his record speaks for itself, as he’s worked successfully all round the world winning a number of prestigious awards and in a variety of media including TV. 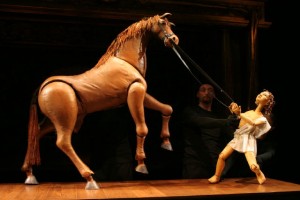 A scene from Greg Doran's production of Venus and Adonis

In 2008 he was able to attract a star cast including both David Tennant and Patrick Stewart to perform Hamlet and Love’s Labour’s Lost and the resulting productions succeeded in introducing new audiences to Shakespeare as well as being critically well-received. He’s not just a “safe pair of hands”. He’s taken risks with little-known early modern plays such as Sejanus and The Island Princess, running the 2002 Jacobean season at the Swan Theatre, paired The Taming of the Shrew with John Fletcher’s The Tamer Tamed, staged non-dramatic works like Chaucer’s Canterbury Tales, The Odyssey and a puppet version of Shakespeare’s poem Venus and Adonis, and he’s directed brand new plays like last winter’s Written on the Heart.

In his interview this evening for Radio 4’s Front Row he talked about how he hopes to re-establish a London home for the Company and the importance of community involvement, as well as his passion for the work of the RSC’s “house playwright”, William Shakespeare and the need to place him in his context as one among many outstanding Elizabethan and Jacobean writers.

The RSC has achieved an enormous amount over the past decade and when Greg Doran takes over the running of the company in September his first job will be to bring together a new artistic team. It will be exciting to see how the RSC, and Shakespeare onstage, continue to develop under his leadership.