Shakespeare and the staff of life 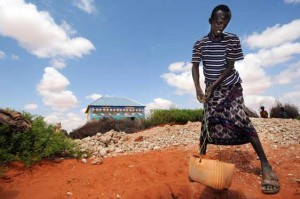 Drought, crop failure, disease. The TV shows pictures of helpless people trying to dig in soil as dry as dust: unless international action is taken to help they will soon become heart-wrenching images of starving children. In Kenya alone there have been repeated crises in 2002, 2006, and 2009, and the situation is now just short of being a full famine.

Many of our health problems in the west are caused by excess of food but it’s not long ago that people in the West also suffered malnutrition. In Shakespeare’s England, it was an ever-present threat. Shakespeare’s Coriolanus begins with civil unrest caused by food shortage. The people want “corn at our price”, and claim that the government is artificially driving prices up by hoarding grain. Menenius, one of the senators, at first suggests that the crop failure is an act of God:
For the dearth,
The gods, not the patricians, make it, and
Your knees to them, not arms, must help.

He next tries to justify the government’s actions by telling the story of the belly, in which Rome is a body that works only because one organ, the belly, takes in all the food, and distributes it to all the limbs that do the work.
There was a time when all the body’s members
Rebelled against the belly, thus accused it:
That only like a gulf it did remain
I’th’midst o’th’body, idle and unactive,
Still cupboarding the viand, never bearing
Like labour with the rest.

His listeners constantly interrupt, and fail to be convinced by his tale. 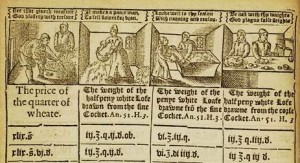 Woodcut showing the making of bread in bakeries, from The Assize of Bread 1608

Crop failures were not uncommon, and living in towns and cities made people more vulnerable. In 1587 William Harrison, in his Description of England, comments on the difficulties being suffered by people living in English towns, because with no space to grow their own grain they were reliant on the fluctuating price of bread:

And as for wheaten bread, they eat it when they can reach unto the price of it, contenting themselves in the meantime with bread made of oats or barley: a poor estate, God wot!

Bread was the most important of foods, and the book The Assise of Bread set down the prices, regulated by law, which bakers were allowed to charge according to the variable price of wheat. Poor harvests and the consequent scarcity of corn caused violent demonstrations in the English midlands in 1604, and Shakespeare may have had these in mind when he wrote Coriolanus in 1607/8.

Shakespeare also knew about the process of making bread. In Troilus and Cressida Pandarus teases Troilus, who’s in love with Cressida, by insisting she is unapproachable unless the right steps are followed, just like making a loaf: “He that will have a cake out of the wheat must tarry the grinding”. Not only the grinding, but the bolting (sieving) of the flour, the leavening, and the rest: “the kneading, the making of the cake, the heating of the oven, and the baking; nay, you must stay the cooling too, or you may chance to burn your lips”. The obvious sexual innuendo only adds to the sense of Troilus’ impatient longing. 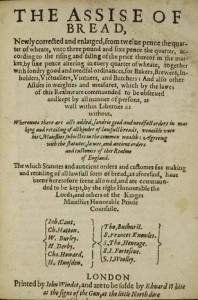 The title page of The Assise of Bread

The Shakespeare Centre Library and Archive’s copy of The Assise of Bread dates from 1608. The full title indicates that the book contains  “sondry good and needful ordinances, for Bakers, Brewers, Innholders, Victuallers, Vintners and Butchers, and also other Assises in weightes and measures, …”.

As bailiff in Stratford-upon-Avon when William was a little boy, his father was responsible for the quality of the beer sold in town as well as checking on the quality and quantity of bread sold. The regulation of the making and supply of these staple foods ensured the health of people in every town and city.

If you want to help prevent starvation there, the Save the Children Fund has a special East Africa appeal.

This entry was posted in Plays and Poems, Shakespeare's World, Stratford-upon-Avon and tagged belly, bread, Coriolanus, famine, grain, starvation, The Assise of Bread, Troilus and Cressida, wheat. Bookmark the permalink.

3 Responses to Shakespeare and the staff of life