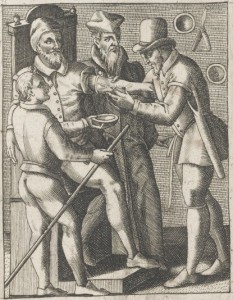 A doctor bleeding a patient

Shakespeare was clearly fascinated by mental illness, many characters displaying a variety of symptoms from Lear’s madness, Jaques’ melancholy, Timon’s bitter cursing, Macbeth’s visions and Lady Macbeth’s sleepwalking, to the obsessiveness of Leontes.

It’s usually accepted that Shakespeare was influenced in medical matters by his son in law, the renowned doctor John Hall. Some of his patients suffer from a kind of mental illness which he calls “hypochondriac melancholy”, combined with physical symptoms such as fever. According to his Casebook, patients were offered his usual combinations of bloodletting and purgatives, as if curing the physical symptoms would also cure the mental ones.

Captain Bassett, for instance, was “afflicted with Hypochondriac Melancholy, with trembling and pricking of the Heart, as also with Pain in the head”. The cure consisted of a concoction made up of leaves, roots and seeds from plants, mixed with oil of almonds, infused, boiled and reduced, then strained, spices finally being added together with syrup of roses.

There seems to be nothing, though, in Hall’s Casebook specifically for the mentally ill. Macbeth’s question to the doctor, “Canst thou not minister to a mind diseas’d?”, might have provoked the same response from John Hall; “Therein the patient must minister to himself”. 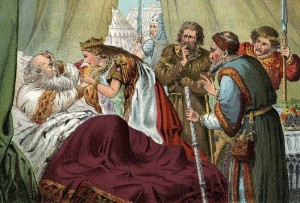 Shakespeare mentions another form of mental illness, which is explained at some length in Sujata Iyengar’s recent book Shakespeare’s Medical Language. This is hysterica passio, also known as “the mother” a uterine disorder thought to be restricted to women, but which Lear claims to suffer from. It manifested itself as a choking or smothering sensation, sometimes resembling apoplexy, which could be mistaken for possession, and was thought to be triggered by melancholy. The illness was recorded by Hippocrates, and Iyengar quotes a 1603 book by Edward Jorden suggesting that a sense of powerlessness could be a contributory cause:
For seeing we are not maisters of our own affections, wee are like battered Citties without walles, or shippes tossed in the Sea, exposed to all maner of assaults and daungers, even to the over-throw of our owne bodies.

Hamlet contains Shakespeare’s most fully-developed study of mental illness, and has always intrigued commentators on the play. I’m indebted to local historian Mairi Macdonald for information about another Stratford doctor who 200 years later had rather more to say about the treatment of the mentally ill, particularly in this play. 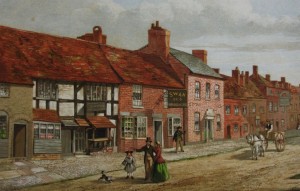 John Conolly's house is the house with the columns, now demolished

In 1823 the young doctor John Conolly came to live in Stratford, in a house next door to Shakespeare’s Birthplace. In the next six years he became the town’s mayor and opened a dispensary to treat those who could not afford to pay medical fees. He was also involved in the town’s Shakespeare Club, and even after he left the town was involved in the campaign to restore Shakespeare’s monument.

As a student he had written on insanity and melancholia, and after leaving Stratford he published An Inquiry into the Indications of Insanity. At the time it was normal to restrain the insane using manacles or straitjackets, but he argued in favour of humane treatment including the removal of physical restraints. Eventually he took charge of the Hanwell Asylum in Middlesex where he put his enlightened ideas into practice. 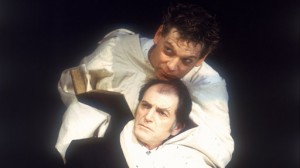 In his sixties he was able to combine his love of Shakespeare and knowledge of the diagnosis and treatment of mental illness, in 1863 publishing his Study of Hamlet. He tries to establish “whether…Shakespeare intended simply to portray the feigning of madness, or designedly drew a representation …of a mind really disordered”.

Conolly’s diagnosis is that Hamlet is indeed in the grip of mental disorder. On his first appearance “his mind is a very whirlpool of violent and miserable thoughts”. After he has encountered the ghost “the balance of his mind is lost, the sovereignty of his reason is really gone….His thoughts are disordered; his very frame is nearly paralysed, and his rapid meditations are not to be marshalled and controlled”.

According to Polonius, after being rejected by Ophelia, Hamlet:
Fell into a sadness, then into a fast,
Thence to a watch, thence into a weakness,
Thence to a lightness, and, by this declension,
Into the madness wherein now he raves
And all we mourn for.

Conolly comments these “might have been copied from the clinical notes of a student of mental disorders. We recognise all the phenomena of an attack of mental disorder consequent on a sudden and sorrowful shock; first the loss of all habitual interest in surrounding things; then, indifference to food, incapacity for customary and natural sleep”.

In spite of Conolly’s diagnosis of Hamlet as a text-book case, there’s still no agreement over whether his madness is genuine or just an act. It’s a question that will continue to be argued over as long as the play is performed or read.

3 Responses to Shakespeare’s minds diseased: mental illness and its treatment