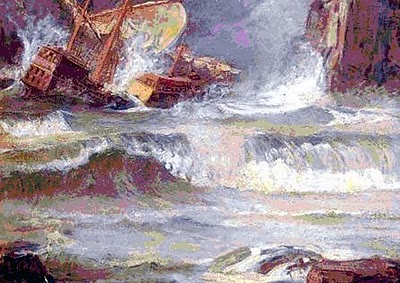 Last week on Twitter, someone drily pointed out in response to the RSC’s new season, that Shakespeare never wrote a shipwreck trilogy. The What country friends is this? season is certainly unusual, and the cynical might say it’s a marketing strategy designed to push up ticket sales.

So is there any justification for putting on productions of plays that feature shipwrecks? Does looking at these plays, The Comedy of Errors, Twelfth Night and The Tempest, as a group make us see them differently?  The RSC’s publicity suggests that the trilogy aims to create “one world of shipwreck, grief, laughter, love and reunion…exploring migration, exile, shipwreck and the discovery of brave new worlds”. It’s quite a lot to live up to.

You can certainly see the attraction of shipwrecks when devising the plot of a play. With no explanation at all, characters can appear in a foreign location and reinvent themselves. The Comedy of Errors and Twelfth Night both explore this idea, though it’s interesting to see how much more slickly Shakespeare uses it in Twelfth Night where Viola appears onstage, swiftly covering all the audience needs to know in a few lines, compared with Egeon’s long explanation of the story so far that opens The Comedy of Errors. Seeing Shakespeare shape his material shows how much his skills had developed by the middle of his career.

But in both these plays the shipwreck is much more than a plot device. It’s an unpredictable force that splits people from their families, and because the people involved in both plays are twins, it separates people from part of themselves. This is almost the first thing Antipholus of Syracuse tells us about himself: 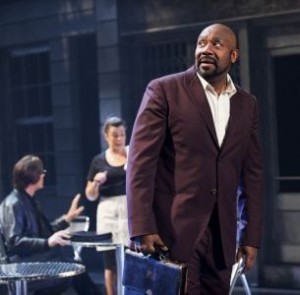 I to the world am like a drop of water
That in the ocean seeks another drop,
Who, falling there to find his fellow forth,
Unseen, inquisitive, confounds himself.
So I, to find a mother and a brother,
In quest of them, unhappy, lose myself.

And in Twelfth Night Viola, parted from her twin brother Sebastian, feels incomplete without him. She even dresses like him “for him I imitate”.  In both these plays, the storms both divide people from and reconnect them with parts of themselves.

In the third play of the RSC’s trilogy, The Tempest, the shipwreck has a different purpose. Here it’s a trap set by Prospero to punish the brother who usurped him. Through his words to Miranda we know “There’s no harm done”, and the uncertainly and tension usually associated with shipwrecks is defused. 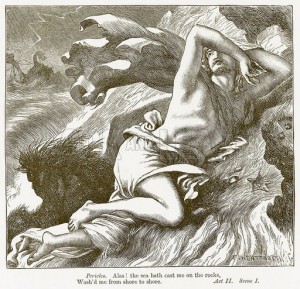 If I’d been putting this season together I’d have made sure that Pericles was the third of the trilogy. It’s not often performed, but it has the sound of the sea pulsing through it. Not one but two storms occur during the play. The first divides Pericles from his identity, “what I have been, I have forgot to know”, while the second divides him from his most precious possessions, his wife and newly-born child. It’s in the second storm scene that it’s thought Shakespeare took over the writing from his collaborator George Wilkins. It’s certainly the point where the play really begins to grab you.

When Pericles is eventually reunited with his lost daughter, Marina, the emotion is as overwhelming as the storm in which she was born: “put me to present pain, lest this great sea of joy, rushing upon me, o’er-bear the shores of my mortality, and drown me with their sweetness”. He greets her:
Oh come hither, thou that beget’st him that did thee beget,
Thou that was born at sea, buried at Tharsus,
And found at sea again.

For me this is the most moving scene in all of Shakespeare’s works, and shipwreck runs right through it.

In all these plays, the sea eventually heals divided, broken lives: “tempests are kind, and salt waves fresh in love!”

The main trilogy runs until early October, and there will be a brief opportunity to see Pericles at the Courtyard Theatre from 5-7 October when it will be staged by amateurs as part of the Open Stages strand of the World Shakespeare Festival. So if you want to see Shakespeare’s best shipwreck play, don’t miss it.