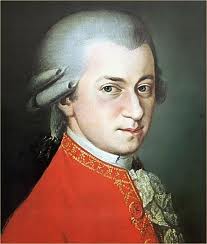 Maybe it’s because I’ve been away from the BBC for two weeks, but the Radio 4 documentary by Dr Robert Winston about Mozart, broadcast a couple of days ago, struck me as a fascinating mix of analysis and glorious music.

Mozart is to music what Shakespeare is to literature, the greatest among many brilliant figures, and there are mysteries about both. Dr Winston revealed that the most persistent mystery about Mozart, which continues to provoke debate, is why he died in 1791 at the early age of 35. Rumours persist about poisoning, and no fewer than 140 different causes of death have been proposed.

For Shakespeare, the mystery which people still struggle to find an answer to is how could a man with limited education and experience of life write plays and poems which appear to display such a wide range of knowledge?

Mozart’s life is well-documented, and there’s no discussion about whether he really wrote his own music. His father promoted him as a child prodigy, touring him around Europe for over three years before he developed into an adult pianist and composer of breathtaking ability. 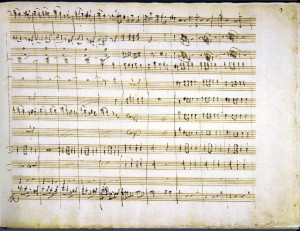 Mozart's manuscript of part of the Jupiter Symphony

His wife Constanze outlived him by many years and left accounts of how he wrote. Jane Glover, the conductor and Mozart biographer, explained that he would appear for a time to be distracted before sitting at his desk and scribbling “as if he was pressing the print button in his head”, accounting for the amazing neatness of his manuscripts. Interestingly, Ben Jonson said of Shakespeare that “in his writing, (whatsoever he penn’d) hee never blotted out a line”, so perhaps the two men shared the same way of working. When looking at manuscripts we like to see the obvious effort, the first choices that were later refined, the bits that were added in. Beethoven’s manuscripts, in which you can see how hard he worked over his scores, are more satisfying to us, and in another parallel, Ben Jonson was  known to labour over his scripts. But just because the writing seems effortless doesn’t mean that the music, or the poetry, was dictated effortlessly by God. Mozart, and perhaps Shakespeare too, was capable of working it all out in his mind, holding it there until it was perfect, and all that remained was the mechanical business of getting it down on paper.

We like to feel that the creator’s life is in some way mirrored by their work, and the ordinariness of Mozart’s life, like Shakespeare’s, doesn’t satisfy our need. Jane Glover noted that Mozart wrote some of his most joyous work when he was going through the most difficult time of his life, as if composing offered a release from emotional pain instead of a way of working it through, rather the reverse of what we expect. See here for a blog post about the Jupiter Symphony by the Harrisburg Symphony Orchestra, Pennsylvania.

Ultimately the mystery is the same for both men. How is it possible for anyone, regardless of background, to be able to create what they did?

Going back to the question of why people are so fascinated with how he died, one writer said of Mozart, “he is culturally supernatural, so no natural death will do”. And with Shakespeare, no ordinary life will do. You can say that they had phenomenal memories, an unusually developed ability to solve problems in their heads, and natural talent. When it’s all added together and it still doesn’t explain the inexplicable, that’s when we call it genius.

One Response to Mozart, Shakespeare and genius