This summer one of the most important events for anyone wanting to know more about why Shakespeare matters will be a visit to the British Museum’s exhibition Shakespeare: staging the world. Booking is already open for the exhibition, running from 19 July to 25 November.

Part of the World Shakespeare Festival running alongside the London Olympics, the exhibition will reflect on how the world came to Shakespeare’s London, and how Londoners perceived the rest of the world. There was tremendous interest in every new discovery, and theatre reflected this excitement, not least in Shakespeare’s plays which featured foreign countries and exotic characters like Othello and Caliban. Plays were not just entertaining, but also informative, and playhouses opened a window onto the wider world. 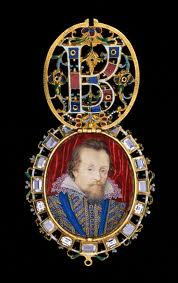 The exhibition will include a range of objects including paintings, manuscripts and jewels, including items like the Lyte Jewel, presented to Thomas Lyte in 1610 in recognition of his work tracing James I’s genealogy back to Banquo, as featured by Shakespeare in Macbeth. This glorious jewel includes diamonds set in gold surrounding a miniature portrait of the king painted by Thomas Hilliard.

Professor Jonathan Bate is contributing to the exhibition:

We will be using Shakespeare’s amazing characters and evocative locations as a way of showing how all the world was a stage, full of dramatic encounters between cultures and nationalities.

As if this wasn’t enough, The British Museum is collaborating with Radio 4 on a series beginning 16 April  on Shakespeare’s Restless World. The full details, including a clip of Neil MacGregor talking about the series, are here, and see here for another version of the news about the series.