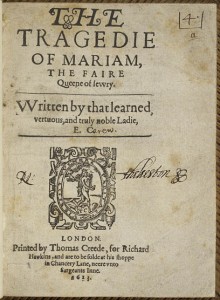 We’re used to the idea that in the early modern period women were seen as intellectually inferior to men. Denied the educational opportunities afforded to their brothers, girls learned only the rudiments of reading and writing. And with their lives dominated by the responsibilities of running a home and family there was little time for study.

So I found walking in to the Folger Shakespeare Library’s exhibition space to find it lined with cases containing the work of dozens of women from the period 1500-1700 quite a challenge to these preconceived ideas.

Georgianna Ziegler’s exhibition Shakespeare’s Sisters introduces the work of around fifty of these women, some familiar names like Mary Sidney, some completely unknown to me, from both England and Continental Europe.

From the items on display it’s clear that women were able not just to write their own work, but in some cases to get it published. And it isn’t just devotional work: it’s well known that Mary Sidney completed a set of psalms after her brother Sir Philip Sidney died leaving them uncompleted, but did you know about Elizabeth Cary, the first woman to publish an original play in England, or that Lady Anne Southwell wrote secular verse, including sonnets, as well as religious poetry? 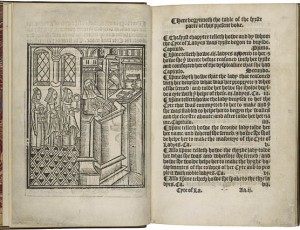 In terms of womens’ roles, the exhibition includes a book on their achievements, written by Christine de Pisan in 1404-5 and printed in English in 1521, called City of Ladies, and much of the exhibition centres on Lady Anne Clifford who spent much of her long life in dispute over her inheritance. As a young girl she had as her tutor the distinguished poet Samuel Daniel who was so impressed with her ability that he wrote a poem praising her learning.

A few months ago I wrote a post mentioning Margaret More, the daughter of Thomas More, who was thought to be one of the best-educated women in Tudor England, and Queen Elizabeth’s learning was much admired. Class certainly played a part, and the women represented in this exhibition had the benefit of privileged backgrounds and high social standing, but they were also expected to be wives and mothers.

This excellent free exhibition challenges our ideas about early modern expectations of womens’ abilities and the social acceptability of womens’ education and writing.

If you’re not able to get to Washington DC to see it in person the Folger has produced a wealth of information available online, available through the link above, and Georgianna Ziegler is going to be giving a lecture on the exhibition in New York on 16 April.

Shakespeare clearly didn’t go along with the idea that women were incapable of learning, creating female characters who are every bit as bright as their male counterparts. Rosalind in As You Like It wipes the floor with Orlando and even the shepherdess Phebe is capable of writing her “very taunting letter”, delivered by the doting Silvius. It’s always tempting to think that Shakespeare’s daughter Susanna, who her tombstone tells us was “witty above her sex” might have been the inspiration for some of these intelligent girls.  His female roles are still some of the greatest ever written for women.

On 7 April Georgianna Ziegler presented a paper on the Folger Shakespeare Library’s recent projects at the Shakespeare Association of America’s annual meeting, where I was privileged to be part of the same panel. A version of her paper has been posted here, and I will be posting a version of my own paper in the next few days.

One Response to Shakespeare’s sisters