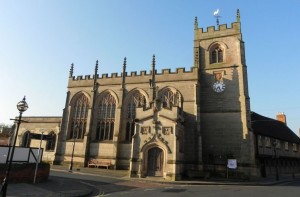 Chelsea’s not the only festival of flowers that’s going on this week. Over the weekend Stratford-upon-Avon has its own flower festival. Every year the little jewel of a building, the Guild Chapel, is decorated by the Avon Evening Flower Club. The Chapel is always beautiful, but can sometimes feel a little bare, so walking inside to find the air full of the scent of fresh flowers and its features decorated with fresh blooms, artistically arranged, is quite an experience, and this year it looks as if it will also offer a welcome retreat from the heat outside. 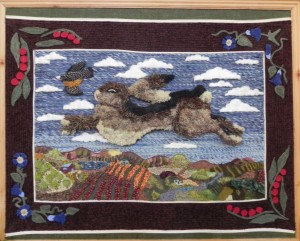 One of the exhibits from the 2010 Festival

The theme of the display this year is, predictably for 2012, the Queen’s Diamond Jubilee and the Olympic Games.

The Guild Chapel is one of Stratford’s most historic buildings, founded as the chapel of the Guild of the Holy Cross around 1269. Elements of that original building are still in existence, but the nave and tower were added in the 1400s. Information about the chapel can be found on the website of the Friends of The Guild Chapel. The Chapel stands on an important junction across the road from the site of New Place, the house which Shakespeare bought when he became prosperous, and where he died in 1616. He would have known the Chapel from his earliest days: the school stands next door and has always been closely associated with it.

Even without the link with Shakespeare the Guild Chapel would be a notable building. Still to be seen above the chancel arch is most of the most remarkable medieval wall paintings still in existence. 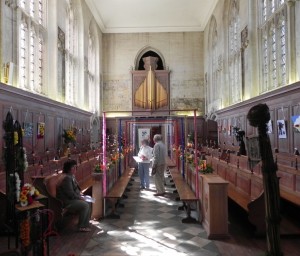 The 2010 Flower Festival including some of the Chapel's wall paintings

The main painting is what’s known as a Doom, depicting the scene of Christ at the Last Judgement surrounded by the dead rising from the graves to be either welcomed into heaven or cast into hell. This wasn’t the only painting though: others, still to be seen, though much faded, are of subjects like George and the Dragon and the murder of Thomas a Becket.

The paintings were whitewashed over just months before Shakespeare’s birth during the winter of 1563 and it was John Shakespeare, his father, who as Chamberlain or Treasurer of the Corporation, was responsible for obliterating them. So significant was this event in the history of the world Shakespeare was to inhabit that Michael Wood began his book In Search of Shakespeare with an account of what happened. This is his description. 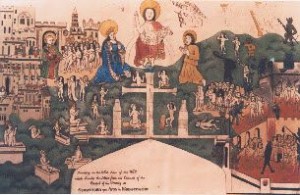 At the start of Elizabeth’s reign a royal injunction had instructed town councils to enforce “The removal of all signs of idolatry and superstition, from places of worship, so that there remain no memory of the same in walls, glasses, windows, or elsewhere within their churches and houses”….Whatever his private feelings, it was John’s duty to vandalize images that represented a world of encoded memories built up over the centuries.

The story had started with Henry VIII’s break from Rome and the reformation of the English Church which began in 1533. It’s strange to think that Shakespeare’s father was one of the last people to see these magnificent murals intact. The Heritage Technology website contains some fascinating 3D digital reconstructions of the interior and exterior of the buildings showing what the wall paintings are thought to have looked like.

If you’re going to be in the area, come and enjoy the Festival. The Chapel is open all day on Saturday, Sunday and Monday and it’ll definitely be worth the modest entrance fee.