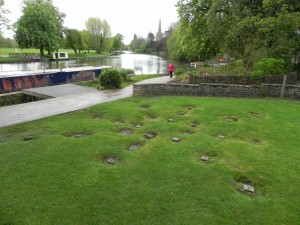 The Nine-Men's Morris in Stratford

Last week I was contacted by a reader of this blog with a query about the Nine Men’s Morris in the Theatre Gardens in Stratford-upon-Avon. How old, he wondered, was it?

I should explain. Nine Men’s Morris is an ancient game which has been played in one form or another  for thousands of years. It’s played on a square board with marked fixed points, as in the illustration. 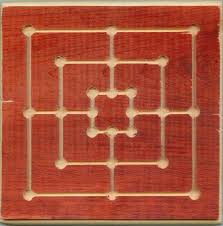 In England the layout of the board has been found incised into the stones of some churches, but it’s a game that unlike chess or backgammon, is no longer popularly played, so here’s a link to the rules.

The Nine Men’s Morris in Stratford, though, is marked out on the ground by concrete or stone markers in the grass. The reason why it’s there is of course because Shakespeare mentions the game, in Titania’s speech in A Midsummer Night’s Dream where she talks about that favourite topic of conversation, the weather:
The nine men’s morris is filled up with mud,
And the quaint mazes in the wanton green
For lack of tread are undistinguishable.
But when did the Nine Men’s Morris get put near the theatre? 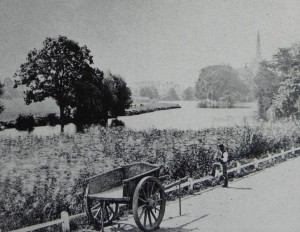 The osier beds with Holy Trinity Church beyond

I conferred with expert local historian Mairi Macdonald who suggested it was not earlier than twentieth century, perhaps 1920s or 1930s. A photograph taken around 1870 shows the osier beds which used to grow on this area before they were removed to be turned into decorative gardens. It’s always been a wet area, and the depressions round the markers are still often filled up with mud, (did they put the Morris there deliberately, so people could see that nothing’s changed?). The RSC planned to move the Morris as part of its recent reconstruction for exactly this reason, even quoting Titania’s speech in their application, but it remains where it’s been for so long just opposite The Dirty Duck.

I’ve consulted a few histories of the town, none of which mention it, even a little book dating from 1911 by Reginald Buckley called The Shakespeare Revival, and the Stratford-upon-Avon Movement. The movement referred to was an attempt to build on the current revival of interest in folk art. Frank Benson, the director of the Shakespeare Festivals in Stratford-upon-Avon, had for several years promoted the connection between Shakespeare and the traditions of England, culminating in 1910 in a Folk Festival that ran alongside the summer Shakespeare Festival, featuring Morris dancing, singing, drama and games. 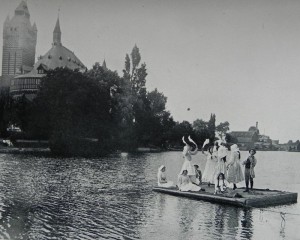 The photograph from this book shows young girls Morris dancing on a raft actually floating in the river. This must have been done for the camera! There is still a link to this tradition in the folk-dancing which is performed by children of the town on the morning of Shakespeare’s Birthday. I’m sure this book would have mentioned the Morris if it had been there in 1911, and my guess is that it was laid out shortly afterwards when the enthusiasm for folk art was still high. I’ve never been quite sure why the game shares its name with Morris dancing, except that both are traditional English pastimes.

April this year was the wettest on record, and the weather has been a reminder of the conditions Titania speaks of:
Therefore the winds, piping to us in vain,
As in revenge have sucked up from the sea
Contagious fogs which, falling in the land,
Hath every pelting river made so proud
That they have overborne their continents.

Over the weekend we have seen the usually gentle River Avon turn into a dangerous and deadly place. Saturday afternoon was sunny, but the river was running high. At Barford, a village not far from Charlecote, a few miles upstream from Stratford, a man and one of his three children lost their lives when their rowing boat capsized in a tragic accident. Even in this normally quiet and tranquil part of England it’s been a sad reminder that we need to be take account of nature’s power.

One Response to Nine Men’s Morris and the English weather