The Boydell Shakespeare Gallery influenced how many people visualised Shakespeare’s plays for most of the nineteenth century, and I’m going to look at some of the images, following up my post on 20 April. The gallery of images is at the end of the post.

33 painters were commissioned to produce nearly 200 paintings, from which 46 engravers made black and white engravings, large and small. With such a large project, it isn’t surprising that it was unwieldy. Nobody had really decided how the painters should approach Shakespeare’s plays as subjects. Were the artists to represent key moments in the plays, or the inner struggles of the characters? Should the paintings represent the best of stage productions, be portraits of real people, or purely the products of the artist’s imagination?  Should they include scenes which are merely described in the plays, or just the scenes as written? Every variation is represented by paintings in the Gallery.

The painters came from many different backgrounds: some specialised in portraits, others in landscape, some were book illustrators, and at least one was a painter who painted sets for theatres, while another had been the official painter on foreign expeditions. Many had spent years studying the Italian Old Masters, or the great Dutch painter Rembrandt.

The entire enterprise depended on the paintings being turned into black and white engravings, so scenes that use dramatic variations of light and shade were always favoured. The nocturnal image of The Merchant of Venice is a landscape of a classical garden in moonlight complete with temple reminiscent of the Rotondo at Stowe Gardens, which successfully conveys the romantic mood of Shakespeare’s scene.

Scenes of the supernatural were also effective, such as the ghost of Julius Caesar appearing to Brutus, Romney’s picture of The Tempest, which includes individualised portraits of the sailors on the tempest-tossed ship and the controlling figure of Prospero, and John Opie’s fantastic scene of Mother Jourdain conjuring a devil in Henry VI Part 2. These dramatic engravings must have been greatly admired when first produced.

Some of the painters included an extraordinary amount of detail based on Shakespeare’s text, as in Fuseli’s painting of the awakening of Titania in A Midsummer Night’s Dream and Reynolds’ Macbeth with the apparitions. I particularly like the way in the Macbeth picture that the apparitions appear as if from underneath a blanket thrown into the air.

Some of the paintings are composed as if the scene was played in a theatre. It’s easy to imagine a stage version of The Two Gentlemen of Verona with the final scene played in front of a forest backdrop just like this, and similarly the scene in Measure for Measure, where Angelo, on the throne, hides his face in guilt from the Duke, could easily be imagined as a stage performance.

There are few attempts at historical authenticity, but several of the characters in The Comedy of Errors wear Eastern costume, and the cluttered Richard II deposition scene revels in the heraldry, armour and religious robes of the medieval setting.

Northcote’s two pictures of Richard III, the smothering of the little princes and the removal of their bodies, are powerful imaginings of awful events in the plot which Shakespeare only hints at. The composition adds to the power of the pictures: the second is drawn from Caravaggio’s Deposition of the body of Christ.

Some paintings were straightforward portraits: Romney’s painting of Cassandra raving is a portrait of Emma Hamilton and she also turns up as Miranda in The Tempest painting.

Humour isn’t easy to convey on canvas, and these paintings rarely managed it successfully. Fuseli seems to want to keep the mood light in his painting of Falstaff and Doll Tearsheet, but Falstaff has more the appearance of an indulgent uncle than a ridiculously lecherous old man, and Doll, perched on his knee, looks respectable rather than comic wearing her jaunty feathered hat.

My favourite picture though is one which makes no attempt to be anything other than a flat image: West’s King Lear on the heath. The characters fill the frame, leaving no room for a historical or topographical setting. The image is full of movement and emotion, and contains telling details like the way Gloucester’s and Lear’s faces are set against their dark billowing cloaks. 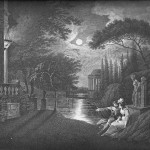 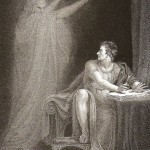 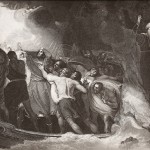 George Romney: The Tempest, Act 1 Sc 1. The storm, with Prospero and Miranda. Engraved by Benjamin Smith 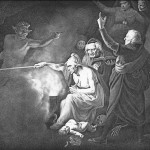 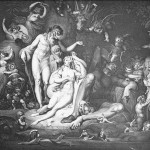 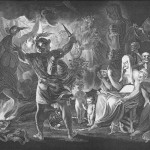 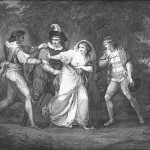 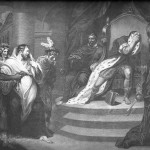 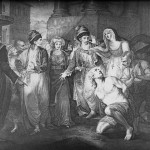 John Francis Rigaud. The Comedy of Errors, Act 5 Sc 1. A street before the priory. Engraved by Charles Gauthier Playter 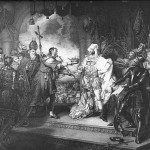 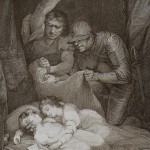 James Northcote. Richard II, Act 4 Sc 3. The smothering of the princes in the tower. Engraved by Francis Legat. 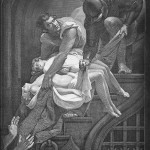 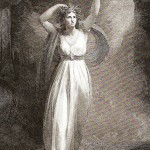 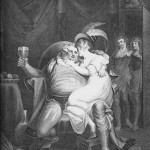 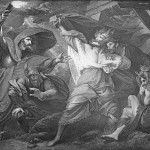 These are less then ten per cent of the images in the Boydell Shakespeare Gallery. The scans don’t do the originals justice, but I hope they give you a flavour of these images.

One Response to Painting the Boydell Shakespeare Gallery