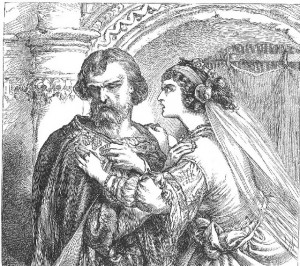 Macbeth and Lady Macbeth are two of Shakespeare’s most intriguing inventions. No matter how many times you see the play or read it, you are always left with questions. Which of them is more to blame for Duncan’s murder? Are the weird sisters in some way conjured up by one of them? In some productions the actor playing Lady Macbeth actually also plays one of the sisters, or they dress like her.

It can be illuminating to look at the sources which Shakespeare used for his plays, to see which elements he retained and enlarged, and which he omitted. Liz Dollimore of the Shakespeare Birthplace Trust has written a whole series of blog posts about the sources, including this one on Macbeth. Shakespeare took the main story from Holinshed’s Chronicles, including the detail that Macbeth was goaded on not only by the weird sisters “but speciallie his wife lay sore upon him to attempt the thing, as she that was verie ambitious, burning in unquenchable desire to beare the name of a queene”. He took some of the details, though, from another part of the same book where the story of Donwald appears. He had a similarly ambitious wife “who had prepared diverse delicate dishes, and sundrie sorts of drinks” for the men who guarded the king’s chamber so that they slept while the murder took place. After the murder Donwald killed the guards and blamed them for the murder, just as Macbeth does. 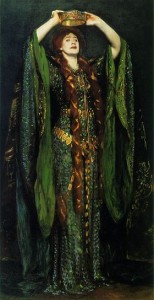 In Shakespeare’s play, Lady Macbeth doesn’t seem to be particularly ambitious for herself. The famous picture by John Singer Sargent of Ellen Terry playing the role in 1889 shows a moment that was not in the production, Lady Macbeth appearing to crown herself. In the text, on her first appearance, where she reads Macbeth’s letter, she speaks only about him:
Glamis thou art, and Cawdor; and shalt be
What thou art promis’d. – Yet do I fear thy nature:
It is too full o’th’milk of human kindness,
To catch the nearest way. Thou wouldst be great;
Art not without ambition, but without
The illness should attend it.

Yet the audience has already heard that murder is in Macbeth’s mind. Lady Macbeth, though, gets more blame than he does for Duncan’s death, and she certainly holds him to his oath to do the killing. But does Lady Macbeth really deserve the title “fiend-like queen”?

Images like the one at the top of the post certainly paint an evil picture of her. But actors who have to perform the whole part including the most disturbing scene in the play, the sleepwalking scene, often find more humanity in her.

After reading the letter, Lady Macbeth conjures up spirits to make herself unnatural, pitiless and fearless, to “fill me, from the crown to the toe, top-full of direst cruelty”. Judi Dench played this part onstage in 1976, and the acclaimed production was filmed. Always an actor who performs with humanity, she broke off at this point with a cry, as if too frightened to continue, before carrying on to complete the spell, as this clip shows.

Her Macbeth, Ian McKellen, interviewed by Julian Curry for his book Shakespeare on Stage, said  that before the murder, “she’s caught up with the thought that ‘All we’ve got to do is kill him!’ … She’s got no imagination”. Judi Dench played her, with textual justification, as a woman with imagination but who buries it in order to goad on her wavering husband.

Macbeth is a professional soldier who finds that murdering a sleeping old man who is also his king is a very different matter from killing his enemies. But once he has started he realises he has no choice but to keep on, eventually ordering the cold-blooded killing of an innocent woman and her children. His conscience troubles him less, while for Lady Macbeth it becomes unbearable. Ian McKellen again:
When later on she does have imagination, when she realises what’s gone on, she goes mad. She’s much more frail than Macbeth. Lady Macbeth as the strong woman is not what you think once you’ve seen the play all the way through. 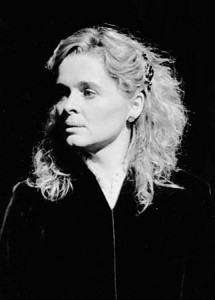 Another Lady Macbeth, Sinead Cusack in 1986, seen on the left early on as the “golden girl”, played on her beauty, showing the character deteriorating both physically and psychologically. In Carol Rutter’s book Clamorous Voices, she interviewed Cusack who had played the sleepwalking scene wearing a soiled nightshirt and scruffy jumper. At the end of the scene “It’s an absolute panic attack. She’s shaking. ‘Don’t say he’s come out of his grave, because if we admit to that one, we’re lost'”. Carol Rutter comments:
The ravaged sleepwalker, showing only the vestiges of the golden girl she had been, recalled the witches’ paradox, ‘Fair is foul, and foul is fair’, for the beauty is defaced, and, in winning, Lady Macbeth loses everything… For Sinead Cusack, the end of Lady Macbeth’s play was ‘Lonely. So lonely. Utter desolation’.

We often see news reports of murders that remind us of those in the play, and it’s easy to brand those committing them “fiend-like”, and “butchers”, as the Macbeths are branded. Shakespeare though reminds us of the human price of murder, for the perpetrators as well as the victims.

5 Responses to Playing the Macbeths