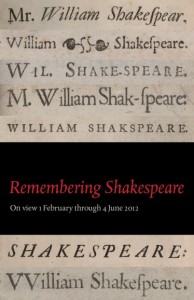 I know I’ve written about it before, but if you’re interested in the history of Shakespeare in print you really should take a look at the blog attached to Yale University’s current exhibition Remembering Shakespeare.  The University’s Beinecke Library contains a wonderful collection of early editions, illustrated books and material about Shakespeare on stage, and PhD student Matt Hunter has been doing a great job of putting images of these treasures onto the blog with his informative commentary.

Following the theme of remembering Shakespeare, I’ve been particularly interested in things that were written about Shakespeare after his death. I’m highlighting three of these, two of which contain manuscript additions to the printed text, making the books unique. 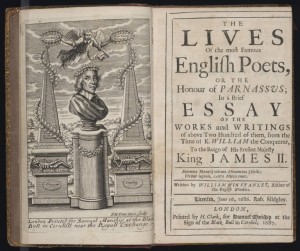 The first example, in the blog for 18 April, was published in 1687, before Shakespeare’s reputation had begun to rise above the level of a normal man. In his Lives of the Most Famous Poets, William Winstanley wrote of Shakespeare and Ben Jonson in a humorous, informal way.
“Many were the Wit combats betwixt him and Ben Jonson,” he wrote, “which two we may compare to a Spanish Galleon, and an English Man of War; Mr. Jonson (like the former), was built far higher in Learning, solid, but slow in his performances; Shakespeare, with the English Man of War, lesser in bulk, but lighter in sailing, could turn with all Tides, tack about, and take advantage of all winds by the quickness of his Wit and Invention.” 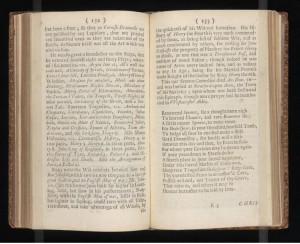 It’s one of the most delightful references to Shakespeare, and comes relatively soon after his death, before, for instance, Nicholas Rowe’s attempt to construct a biography for his edition of the plays which was published in 1709. Incidentally there are also many illustrations of this edition on the blog.

The second example was published on 20 April, the 1778 Modern Characters of Shakespeare. This little book  prints extracts from Shakespeare’s works, but it’s an irreverent view. To each quotation the author has attached the name of a contemporary figure – leaving a few gaps in the name to avoid getting into trouble. The disguise was never meant to be a hard puzzle to solve, and the owner of the book has gone through it, filling in the names by hand. 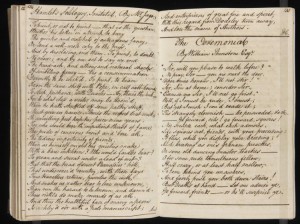 The final one was published on 21 April, and it’s a 1773 volume of poems. This takes a really satirical look at Shakespeare’s poems. Not for the last time, Hamlet’s “To Be or Not To Be” is parodied. In this book, the poem is headed “Hamlet’s soliloquy, imitated” and its first line reads “To print or not to print – that is the question”.

These examples all illustrate the fact that Shakespeare’s plays and poems were seen as fair game for writers and printers, even in the late eighteenth century when Garrick was promoting the idea of the divine Shakespeare.

The exhibition catalogue, which the curator David Scott Kastan has very kindly sent me, is a beautiful, highly informative book on the subject of the history of the appreciation of Shakespeare from the earliest days. I haven’t been able to get to the exhibition itself, but he and Matt Hunter are doing Shakespeare-lovers and students a great service by making the holdings of the Beinecke Library available online.