Telling a book by its cover 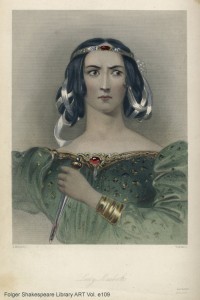 A coloured illustration of Lady Macbeth, 1850

If you’ve been following my blog, you’ll have noticed that among my interests are early books and internet resources as well as Shakespeare.

I’ve just become aware  of a group of linked resources which bring together people who spend their lives in the world of early printed books and special collections. They’re mostly librarians, but also include bookdealers who create extremely full descriptions of the items they have for sale.

Echoes from the Vault is owned by the University of St Andrews, but it’s the specialism that is important, not the organisation, the collection, or the profession of the contributor. Members of the group keep in touch and help each other out. In the post Bloggers of the World Unite, the authors Brooke Palmieri and Daryl Green (a bookseller and a librarian, writing jointly) state the aim of the group: “It is our hope that we can reawaken the potential of these books, manuscripts and photographs as research and educational resources by getting them in the hands of students, staff and researchers”.

The group includes several Shakespeare specialists, such as the Folger Shakespeare Library’s blog called The Collation. I particularly liked their recent post on the history of cataloguing early printed books and the signficance of the mysterious abbreviation “col”. And I’ve mentioned before the Remembering Shakespeare blog from Yale University.

It’s a very specialised subject area, but like most things, the closer you look the more interesting the books get, and all the blogs tell fascinating stories about discoveries which have been made about the books. Many early printed books have complex and intriguing histories. Owners may have written inside the book, anything from a signature of ownership to lines of comment in the margins. In their long history they may have been rebound several times or bound in combination with other titles.

The St Andrews blog has posted a whole series about book bindings. Not just there to protect the book, bindings can be beautifully decorated by being gilded, embroidered, or set with stones. When Juliet is told that Romeo has killed her cousin Tybalt, she compares Romeo with a beautiful book:
Was ever book containing such vile matter
So fairly bound? O that deceit should dwell
In such a gorgeous palace!

The illustration is of a coloured print from the Folger Shakespeare Library, “Lady Macbeth” in Characteristics of women, moral, poetical, and historical / by Mrs. Jameson. New York: John Wiley, 1850.