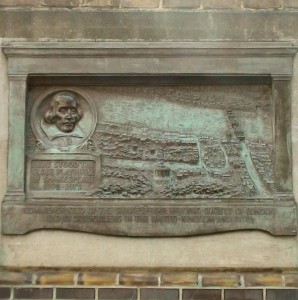 On Wednesday morning the news broke that archaeologists have found the remains of the Curtain Theatre in the Shoreditch area of north London, where it’s thought Shakespeare’s  plays Henry V and Romeo and Juliet were performed, perhaps for the first time. We all associate Shakespeare with the Globe Theatre on the South Bank of the Thames, but this opened only in the middle of 1599 by which time he’d written many of his finest plays. In his 1598 book Palladis Tamia: Wit’s Treasury, Francis Meres lists over a dozen plays which had already made Shakespeare’s name.

Considering how heavily London has been built on since Shakespeare’s day, it’s amazing that remains of so many of these buildings still exist under the ground. Back in 1909 a plaque was put up to commemorate the Globe Theatre itself, the first such monument. In 1989 some remains of this theatre were found, but a more complete excavation has never been possible because of the presence of other buildings. 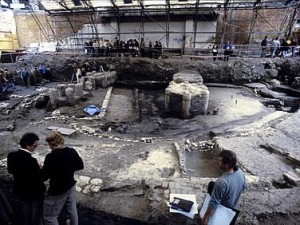 In the same year, 1989, remains were found of the Rose Theatre, close to the Globe site, during routine excavations before a new office block was built. After a high-profile campaign to save the site, the building was adapted to allow the remains to be preserved and the Rose Theatre Trust still exists to realise the site’s potential for interpretation and display to the public. When it was built in 1587 it was the first theatre on the South side of the river. In this building Marlowe’s great plays Tamburlaine and Doctor Faustus, Kyd’s The Spanish Tragedy and Shakespeare’s Titus Andronicus and Henry VI Part 1 were performed. The success of the Rose encouraged other theatres: the Swan in 1595, the Globe in 1599 (rebuilt 1613) and the Hope in 1614. Some remains of the Hope were also uncovered in 1999. 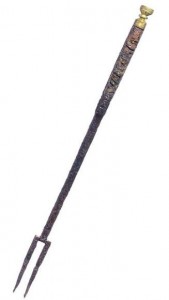 The fork found at the Rose

The Rose Theatre excavations also uncovered some important artefacts: the hazelnut shells that covered the surface of the pit, and a delicate fork which an affluent theatregoer might have dropped in 1592. This item was described in Snacking Through Shakespeare, an episode of Shakespeare’s Restless World, transcribed here.

The first purpose-built theatres in London, though, were north of the river, and well outside the jurisdiction of the City of London so that performances of all kinds could take place. In his 2003 TV series In Search of Shakespeare historian Michael Wood visited  some premises in Shoreditch which incorporated parts of the site of The Theatre, but it was only in 2008 that actual remains were found and a report was written on the complicated history of the site. Hackney Museum is holding an exhibition of some of the finds until September 2012.

Until 1596 James Burbage leased the land on which The Theatre stood, but in that year he lost the lease, so for a couple of years The Lord Chamberlain’s Men used other venues including the nearby Curtain. Eventually in 1599 The Theatre was famously dismantled, the timbers being taken from Shoreditch south of the river where they were used to build the Globe Theatre, finally giving the company a permanent home which they could control. 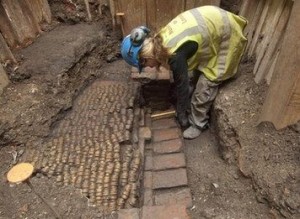 Excavations at the Curtain Theatre, 2012

This week has come the news about The Curtain, built just a year after The Theatre, in 1577, and the remains they have excavated look impressive. Museum of London Archaeology has been responsible for these excavations, which show us something of the reality of Shakespeare’s London and the vitality of its theatres, all built within a few decades of each other. It’s going to be fascinating to see how this excavation progresses and what more will be found out.  Although it’s the reconstructed Globe, sited down on the south bank of the river, that now draws the crowds, the re-creation would not be anything like so accurate without the information which the digs provided.

Shakespeare’s Globe was only built because Sam Wanamaker, an American actor, was so disappointed to find only the plaque when he went in search of Shakespeare’s theatre that he devoted much of the rest of his life to creating a replica. He died in 1993 and, after his death a grant enabled the theatre building to go ahead. It was officially opened in June 1997, since when it has gone from strength to strength, this year hosting the Globe to Globe Festival which in 7 weeks has staged 38 plays, each in a different language. Here’s an assessment of this extraordinary project. 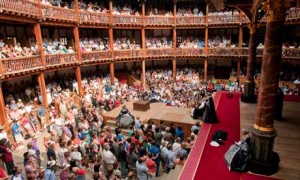 One Response to Digging for The Curtain Theatre: archaeological discoveries