Julius Caesar on stage and screen 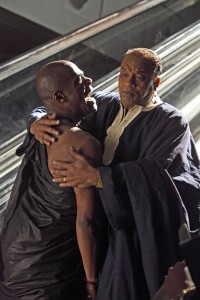 Greg Doran’s production of Julius Caesar breaks new ground. With an all-black cast, set in an unnamed modern African city rather than imperial Rome, the film version has been shown on TV while still being performed onstage at the Royal Shakespeare Theatre. I watched it on TV on Sunday, and have seen it onstage twice, once at one of the performances which was being filmed. After the other performance, the actors came back on stage to answer questions in a post-show talkback.

As far as I know, it’s the first time that a TV version of a stage production has been filmed while the play was still in rehearsal. Doran has directed stage productions for TV before, including the David Tennant Hamlet,  and he knows the pitfalls of transferring from one medium to another. One of the issues is that of scale: after a long stage run actors usually have to tone down their theatre performance to address viewers in their living rooms. At the talkback session actors commented that it had been a positive experience to film intimate scenes such as that between Brutus and Portia, as they were then able to include details in their stage performances. 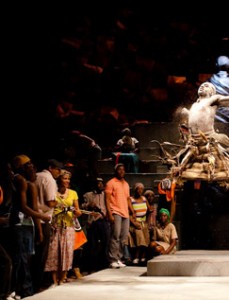 Another interesting innovation is that some scenes were filmed in the theatre in front of a full audience, while most of the play was shot on location in an abandoned warehouse and shopping mall in Colindale. The sections shot onstage are the beginning and the very end of the play, and the Forum scene, Act 3 Scene 2. In most of these scenes the filming uses the on-stage chorus of well-choreographed “Roman citizens” who tie the action together by singing, chanting and dancing before and during the play, and react to the speeches in the Forum. In the sections filmed on location it felt very obvious that this chorus weren’t available. Click here to go to links relating to the filming. 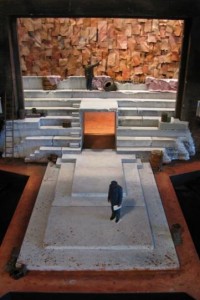 The model for the stage set

The disconnection between the stage set and the location makes for intriguing viewing. The stage set shows us a Rome that is run down, but that still has some warmth and grandeur. Some of the scenes filmed on location gave a strong sense of a dangerous modern city, familiar to us in news reports, but the dirty rooms, claustrophobic corridors and dingy open spaces give an impression of an empty, abandoned Rome rather than the vibrant scenes of revolt which we saw during the Arab spring.

But the location does provide some effective moments. Onstage, Caesar’s assassination is staged very much as Shakespeare wrote it. He dies centre stage, conspirators rushing in to knife him. It’s a shockingly public scene, as it would be if the Prime Minister were attacked in parliament. But Doran takes advantage of the abandoned location to make a different point about political assassinations, and perhaps about death itself. With nobody to see, nobody to react, Caesar dies, crumpled up near the bottom of a disused escalator. For a TV audience the death of the mighty Caesar is reminiscent of the ignominious death of tyrants like Colonel Gadaffi. So much for Brutus’s naive suggestion:
Let’s carve him as a dish fit for the gods,
Not hew him as a carcase fit  for hounds.

During the talkback, several questions were asked about the accent adopted for the production. The idea of using an African accent was first raised during a symposium that took place over a year ago, and eventually led to the use of a Kenyan accent, though it was pointed out that there are as many Kenyan accents as there are English. The actors in the production originate from several different parts of Africa and from the West Indies.

The accent has a deliberate, extravagant quality, and one of the great pleasures of the production, both on stage and film, is hearing Shakespeare’s words spoken with distinction and precision. CisBerry, (the RSC’s veteran voice coach) says that intentions are carried through consonants, and emotions are carried through vowels. In this accent the vowels are lengthened so that “will” becomes “weel” and “blood”, “blahd”, and “r”s are rolled.

In my recent post about rhetoric, I looked at how rhetoric can provide a framework on which to build an argument, but didn’t go into another requirement, that an orator has also to delight his listeners. In The Art of Rhetorique, Thomas Wilson explains: “every orator should earnestly labour to file his tongue that his words may slide with ease, and that in his deliberance he may have such grace as the sound of a lute”.  We don’t very often take into account the sensuousness of the sound of Shakespeare’s words, but the use of the Kenyan accent gives a richness to the sound which we who are used to Received Pronunciation rarely hear.

If you’re interested in the use of varied accents and their effect on Shakespeare’s plays, take a look at what Northern Broadsides has been doing over the last twenty years to promote the use of northern accents onstage. And although we don’t know precisely how Shakespeare’s plays sounded, David Crystal has done some extraordinary work on OP or Original Pronunciation.

If you’ve had your curiosity aroused by the film, come to see the live production on its tour. If you haven’t caught it yet, the film will be on BBC IPlayer until 1 July, and if you’re not able to get it there, at least listen to the trailer.

5 Responses to Julius Caesar on stage and screen