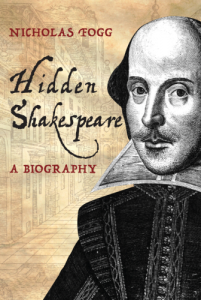 In the year of the World Shakespeare Festival a new biography of Shakespeare has hit the bookstands. It’s done so with little fanfare, perhaps appropriately since it has the title Hidden Shakespeare.

It sometimes seems that every author feels obliged to write a biography of Shakespeare, so important is it to link their name with the great man. This book is different. Nicholas Fogg is, as far as I know, the first person born and brought up in Stratford to publish a biography of Shakespeare. This wouldn’t in itself give him an advantage, but he has for decades been obsessed with the man and his works, which he’s observed from his home in another English country town. Back in 1986 he published Stratford-upon-Avon: Portrait of a Town, a detailed history which inevitably included information about the town’s most famous son, and which has provided some of the background for this latest book.

Hidden Shakespeare brings to the fore the minutiae of town life, based on the author’s detailed study of the records of the borough. The Elizabethan and Jacobean period is often painted as “Merrie England”, but here he gets below the skin of the town to reveal that in Shakespeare’s lifetime Stratford was not a sleepy backwater. He documents several murders and other crimes, petty misdemeanours, and major fires and outbreaks of plague. Enclosing common land and bad harvests caused hardship, even starvation in the town as well at the surrounding countryside, and national events like the Gunpowder Plot had repercussions far from London.

The book never turns into a catalogue of the town’s history because, with a light touch, the author links these events with parallels from Shakespeare’s works. When talking about disorder, he reminds us of Dogberry and the watch in Much Ado About Nothing. Looking at the haste of Shakespeare’s marriage he compares it with others in the town, and quotes Ferdinand and Miranda in The Tempest. And he spots some lovely details: I’ve never before read that John Hall’s father William, an astrologer and alchemist, had a servant called Matthew Morris who settled in Stratford, naming his children Susanna and John after Shakespeare’s daughter and son-in-law.

Shakespeare spent most of his creative life in London, and the story maintains its pace because the author has also closely examined events in the capital. He suggests for instance that the Thomas Lucy who is mocked in The Merry Wives of Windsor is likely to be the son of the Thomas Lucy of Charlecote who Shakespeare is thought to have fled from as a young man. The younger Thomas Lucy was a well-known figure in the London of the 1590s and the subject of a long-running court case, making Shakespeare’s reference topical rather than obscure. And he shows how fears about the succession to the throne, which became almost a national obsession, crop up not just in Richard II, but also in Hamlet, King John and even The Rape of Lucrece.

Watching the author make connections between many seemingly disconnected plays is one of the great pleasures of reading the book. In the space of one page about the gravedigger’s scene in Hamlet, he moves from that play to Julius Caesar, Romeo and Juliet, Macbeth and Richard III. Indeed if I have a criticism it’s that some readers who aren’t well-versed in the plays and the history of the time might not always get all the references.

He also makes comparisons between Shakespeare and the lives of his contemporaries: other Stratford boys like Roger Lock, Richard Field and John Sadler who went to London to work, and with other writers and actors like Christopher Marlowe, Ben Jonson and Edward Alleyn, many of whom like him were from the rising middle classes. 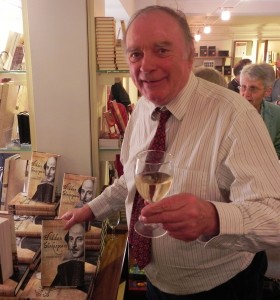 Nicholas Fogg at the launch of his book Hidden Shakespeare

All biographers still have to counter the notion that Shakespeare was an ideal national hero who existed almost in a vacuum, and Fogg is relaxed enough to allow Shakespeare his imperfections, his dark ladies and fair young men. A hundred years or so years ago a biographer would have been unlikely to mention with approval that part of the house we now know as his Birthplace was let out as a public house. Fogg rather likes he idea: his Shakespeare is human.

Fogg’s book is also a pleasure to read because of his enjoyment of the English language, from the handing down of traditional words and sayings to his own nice turn of phrase. Talking of Hamlet, “Death is an unseen character in the play. He stalks the halls of Elsinore like his counterpart in the morality plays”.

In his foreword, he imagines how it would feel to be the gods setting out to create the greatest writer who ever lived. As well as endowing the child with genius, “the time, culture and place that we select are essential to the project”. This book acknowledges that all people are the product of their family background and environment, and that Shakespeare became Shakespeare because of the coincidences of his birth.

Hidden Shakespeare is published by Amberley Publishing, and an article about it can be found here. You can get a very different, but compelling and watchable view of Shakespeare’s life by watching the two-part series Simon Schama’s Shakespeare beginning on 22 June on BBC2 at 9pm.