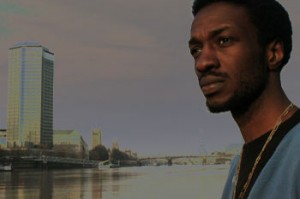 I’m always impressed by the number of ways in which people adapt Shakespeare. He and his works seem to have something to say to everyone. Since I began writing this blog I’ve been contacted by many people telling me what they’ve been doing with Shakespeare, and I thought I’d share some of them: just follow the links to websites, books, videos and blogs. A few are commercial sites: I’m not endorsing any of the products, but hope you will enjoy taking a look at them.

First of all, here’s news of a film, a fresh and contemporary version of The Tempest. Made over five years by the company Fifth Column, it’s a reimagining of the play in which 17 young actors from South London attempt a production. The resulting film reflects the 2011 riots, urban youth culture, the lead-up to the Olympic Games and questions about English identity. It will premiere on 6th July at the East End Film Festival and will feature in the Shakespeare Film Festival to be held in Stratford-upon-Avon in the autumn.

Now a couple of educational sites: Early Shakespeare is a fun, nicely-designed site where you can find software designed to help introduce children to Shakespeare. There’s a free sample of a section of A Midsummer Night’s Dream on the site for you to try.

Minor Critics is a very personal account of a New York resident who is introducing her children to Shakespeare and other drama via the New York Classical Theater Company, Theatre For a New Audience and other acting companies. Not many people have access to as many live performances as Mila, but her blog is full of ideas about how to encourage children to learn.

If unusual Shakespeare-related fiction is your thing, take a look at D R O’Brien’s novella. It’s certainly different: based very loosely on the story of The Tempest,  it “slithers hideously onto the literary mash-up scene, whispering of cosmic horrors and eldritch tales whilst espousing sweet soliloquies and profoundly contemplating mankind’s place in the universe.” Follow this link if you like the sound of it.

Shakespearesworld is a YouTube channel containing videos by Tony Butler, the Director of the Shakespeare Workshop in London. It contains several short videos on subjects from individual speeches to Shakespeare and the Audience’s Imagination.

Here’s a light-hearted blog written by an Irishman in London, Tales of an Irish Exile that contains a link to an episode in the BBC’s Shakespeare’s Restless World.

And Sarah Beckwith from Duke’s University votes for her favourite five Shakespeare plays. Why don’t you take a look and see if you agree with Sarah’s choice?

Finally a couple of sonnet-related items:  Alan Tarica has created an adaptation of the sonnets in which he reverses the order of the poems, so the poems that try to persuade the young man to marry come at the end rather than at the beginning. He aims to provoke discussion about the accepted meaning of the poems. His commentary is based on the idea that “a young (initially) man who after a brief seduction…by his older and much more powerful lover and muse, appeals to her to recognize and live on through their son”. 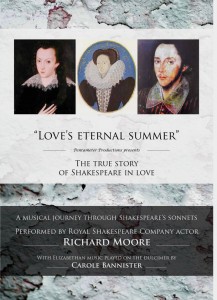 Last but by no means least is Pentameter Productions’  sonnet show Love’s Eternal Summer. It’s performed by Richard Moore, an actor who has worked extensively with the Royal Shakespeare Company, accompanied by Carole Bannister playing Elizabethan music on the dulcimer. This is a quote from a review from their show in Truro.
Richard Moore held the audience spellbound with his powerful and moving interpretation of Shakespeare’s sonnets, linking them by narrative with their historical background and giving them an extra dimension. Carole Bannister’s precise and gentle dulcimer playing was a perfect counterpoint to the sonnets. It is an evening of elegance and style, a touch of Elizabethan magic.
The facebook page is entertaining, and Richard and Carole are looking for venues so if you’d like to book them, get in touch.

This entry was posted in Legacy and tagged A Midsummer Night's Dream, The Sonnets, The Tempest, website, YouTube. Bookmark the permalink.

One Response to Shakespeare’s infinite variety