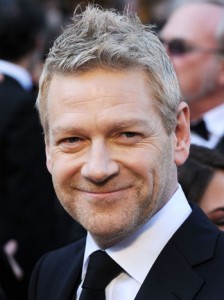 This year The Queen’s Birthday Honours list has recognised a bumper crop of people in the arts. For me the most pleasing was the knighthood which has been awarded to Kenneth Branagh. His association with Shakespeare goes back to his teenage years, and he’s promoted Shakespeare’s works to young audiences through his many films.

I first saw him playing Henry V in 1984 at the Royal Shakespeare Theatre, on the second preview, standing at the back of the stalls. As the youngest-ever Henry V on that stage,  only 23, his performance could have been a bit rough around the edges. But not a bit of it. 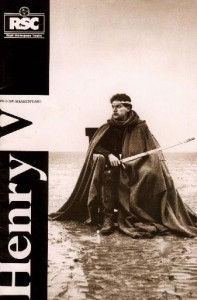 Programme for the 1984 Henry V

Branagh’s precocious confidence and his energy in mastering that difficult stage and auditorium was extraordinary. I saw the production repeatedly that year, as well as Love’s Labour’s Lost (King of France), Hamlet  (Laertes) and, at the RSC’s studio theatre The Other Place, a new play called Golden Girls about a team of women athletes. His sprinter, was, I thought, the only unconvincing role he played. Although he had already been awarded Most Promising Newcomer, it was this season with the RSC that made him a star. He writes disparagingly of his performance in the other plays that season, but I remember them with great enjoyment. Was there anything he couldn’t do?

After his two-year stint Branagh went independent again. In 1986 he decided to put on and star in Romeo and Juliet. In order to work out what really worked onstage he came to the Shakespeare Centre Library in Stratford-upon-Avon where I worked and asked to see the prompt books for the last 40-years worth of RSC productions. I asked him why he was working on the play and he told me he was planning a production. After it, he capitalised on its success by creating the Renaissance Theatre Company and staging a trilogy of Shakespeares at Birmingham Repertory Theatre’s Studio: Hamlet, Much Ado About Nothing and As You Like It, to be directed by three distinguished actors: Derek Jacobi, Judi Dench and Geraldine McEwan. 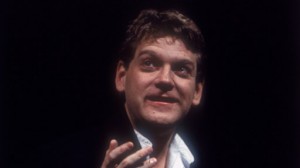 He directed a production of Twelfth Night casting Richard Briers as Malvolio, so successful that it was filmed for TV. He played Richard III. And he began his series of Shakespeare films: Henry V, Much Ado About Nothing, Othello, Hamlet, Love’s Labour’s Lost, As You Like It. He sent himself up in one of the Harry Potter films and wrote and directed a film which is a tribute to Hamlet, In the Bleak Midwinter. Here’s a link to a post about this film by Stuart Ian Burns.

In 1992-3 Branagh made a return to the RSC to perform as Hamlet, directed again by Adrian Noble, in a full-text version. By this time he was closely associated with the play, and had played the title role several times. A sellout on its London and Stratford showings, Branagh later filmed the play for the big screen.

When a very young man he was hailed as the new Olivier, which must have been an unhelpful comparison. Olivier’s best-known work was his film of Henry V, created as a piece of wartime propaganda, while the 1984 production, directed by Adrian Noble, was widely referred to as the first “post-Falklands” production. The play and subsequent film wanted to avoid the jingoism of the earlier version in favour of portraying the realities of war and kingship. Many people will remember the starkness of the execution of Henry’s one-time friend Bardolph, garotted onstage, his body left kneeling in front of the audience. As Henry watched, it felt as if he was saying a final goodbye to his youth as he accepted the necessities of being a king. And in the film of Henry V the long tracking shot through the battlefield after the end of the Battle of Agincourt testified to the inhumanity of war.  Here’s a link to a more rousing moment, the St Crispin’s Day speech. The association with Olivier lives on: in the recent film My Week With Marilyn Branagh plays Laurence Olivier.

In recent years he’s become much better known for other TV and film roles and for directing, but it’s his Shakespeare work which has had the most impact. In his autobiography Beginning, written before he was 30, he described how he felt about Henry V.
I have been able to produce exactly the film I wanted. It will not be to everyone’s taste, but for me it succeeds in realising what we set out to do… an indefinable element of commitment and heart shines through the picture. It is a popular, accessible and yet serious view of an underrated play.

There must be millions of people for whom watching this or one of his other films has been the spark for understanding and enjoying Shakespeare, and here’s hoping we’ll see more of this popularising agenda in years to come.

PS  have just received a Michael Coveney piece about Alan Howard and others, reminding me of Alan Howard’s brilliant Henry V 1975-7. Read his piece here.