The Thames Jubilee Pageant: the royal throne of kings 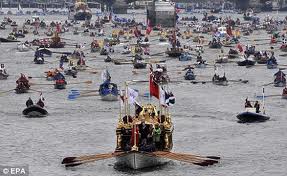 The Jubilee weekend’s most spectacular event, the Thames pageant, was a bit of a victim of the English weather. The brand new Shard, the tallest building in Europe, disappeared into the mist as the weather worsened.

Apparently nowhere in the UK is further than 70 miles from the sea, and the pageant was a reminder of how important our waterways and coast are for both  leisure and to move goods from place to place. Over a thousand boats of all shapes and sizes made their way down from Battersea Bridge to Tower Bridge. They’d come from all round the UK, including a Cornish gig, the last ocean-going paddle steamer and a fishing boat from Shetland. There’s a long tradition of holding river pageants, which is told in this video. When it comes to the Olympics two sports that the UK always excels in are rowing and sailing. We do love our boats.

There were even a few of the little boats that had helped to evacuate British troops from Dunkirk during the second world war. Shakespeare was very much aware of the isolation of Britain from the rest of Europe. It was during his lifetime, and the reign of the first Queen Elizabeth, that England really began to be a force to be reckoned with. With the defeat of the Spanish Armada in 1588 the country was confirmed as a maritime power, even if the Spanish fleet was really defeated more by the weather than by English ships. 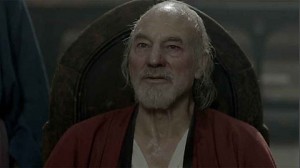 Patrick Stewart as John of Gaunt in the BBC's forthcoming production

Shakespeare’s history plays, the two great tetralogies, concentrate mostly on civil war and its consequences.  The earliest in setting, if not in composition, is Richard II. John of Gaunt, a representative of old England, sets the tone for the other plays which lead through the Wars of the Roses. In his famous speech he describes Britain as “this sceptr’d isle”,  but his point is that the country is eroding itself from within.
England, bound in with the triumphant sea,
Whose rocky shore beats back the envious siege
Of wat’ry Neptune, is now bound in with shame…
That England, that was wont to conquer others,
Hath made a shameful conquest of itself.

At the same time John of Gaunt sees Britain as an island cut off from other countries and the threat of invasion which they represent.
This little world,
This precious stone set in a silver sea,
Which serves it in the office of a wall,
Or as a moat defensive to a house,
Against the envy of less happier lands.

The idea of the country, separate from the rest of Europe, is one which comes up over and over again. In King Lear,  the King brings a map of his kingdom onstage and proceeds to divide both map and kingdom between his daughters. It would be interesting to know if in Shakespeare’s original production, performed before King James, it was a map of James’s Britain or, more historically, just England and Wales. Either way, the coast marks the boundary of the map, and his banished daughter Cordelia is forced to make her home overseas. 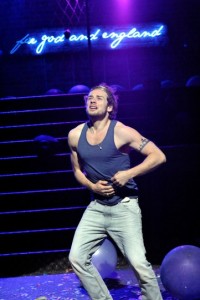 Alex Waldmann as King John in the 2012 RSC production. Photograph by Keith Pattison

Shakespeare chooses to open King John with the King of France’s demand that John gives up the crown of England to avoid “fierce and bloody war”. Although set centuries before England’s split from the Roman Catholic church, the dispute is between England and a European Catholic alliance aiming to put a puppet monarch on its throne. At the very end, once the conflict is resolved, some of Shakespeare’s most patriotic lines proclaim the independence of England against invasion, and the importance of remaining united:
This England never did, nor never shall,
Lie at the proud foot of a conqueror
But when it first did help to wound itself.

Cymbeline was written only a little after King Lear and in it Britain is threatened by demands from Rome for unpaid tribute.  Roman troops invade and are defeated, but in an ending that’s almost the opposite of King Lear the family of three siblings is reunited, the King comes to his senses, and the heroine Imogen is reunited with her husband. “Pardon’s the word to all”. Finally, in an extraordinarily mature decision, the king pays the tribute owed to Rome: peace and reconciliation over war.
Publish we this peace
To all our subjects….Let
A Roman, and a British ensign wave
Friendly together… Never was a war did cease
(Ere bloody hands were wash’d) with such a peace.

The Queen promoted the formation of the Commonwealth to encourage countries to be “friendly together”, so it’s appropriate that boats representing all the Commonwealth nations were there, waving their flags.

One Response to The Thames Jubilee Pageant: the royal throne of kings