For a man about whom we are supposed to know next to nothing, an awful lot of books have been written about Shakespeare’s life. A couple of weeks ago I wrote a piece about Nicholas Fogg’s new biography of Shakespeare, and in researching it I caught up with some new ones, as well as some old favourites. Here are a few notes about some of them.

Bill Bryson. Shakespeare
Easily the most popular biography, Bryson acts as our guide, only one step ahead of us his readers. As you’d expect it’s entertaining and skilfully put together. He makes the subject approachable by telling stories about other people’s search for the truth: his story about the Chandos portrait, for instance, doesn’t just go into the complexities of Shakespeare portraiture but also explains how it is that much of what we hope to find out about Shakespeare is lost, confusing or impossible to verify. Not the most accurate, but neither is it misleading. 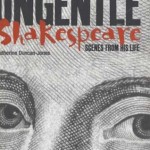 Katherine Duncan-Jones. Ungentle Shakespeare
With its controversial title, the author is clearly trying to rescue Shakespeare from the lazy generalisations and assumptions of “genius” with which biographers used to credit Shakespeare. Her emphasis is to show Shakespeare as a man among men, and a writer among writers. It’s not meant to be exhaustive, so Duncan-Jones doesn’t tangle with some of the issues she’s uncomfortable with like the possible Lancashire connection, and the Sir Thomas More document. 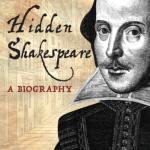 Nicholas Fogg. Hidden Shakespeare
The latest biography, which I wrote a whole post about recently. It’s both factually dense and a good read, a balance not always made by other biographers. And unlike some of the others, you don’t get the feeling that Fogg is trying to make clever points or write sparkling prose. You’re aware as you read it that it’s a subject he’s comfortable with and knows intimately because he’s been thinking about it for years. 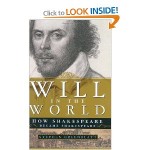 Stephen Greenblatt. Will in the World
Greenblatt’s book is engaging and as forcefully written as you would expect from such a senior academic, but he slips into the method of assuming he can raid the plays and poems for the story he wants to find about Shakespeare’s experience. With no actual evidence, for instance, he assumes that the story of the sonnets is the primary love interest of his life. “There is no room for wife and children”. It’s very persuasive, but there’s a lot of speculation filling in the gaps between the facts.

Graham Holderness. Nine Lives of William Shakespeare
Holderness’s book was only published in 2011. He’s taken an unusual approach: he takes 9 sections of Shakespeare’s life, and writes first a chapter about the facts relating to it, then a piece of fiction based on those facts, each in a different style. One is written in the style of a Sherlock Holmes story. It’s great fun, but is Holderness just trying to show us what a clever writer he is?

Park Honan. Shakespeare. A life
Park Honan is a professional biographer, and in this, as in his other biographies he concentrates on the factual record. If you want reliable information, Honan’s your man, but for me his reluctance to enter into much consideration of areas of Shakespeare’s life which aren’t strictly in the record can make his writing dry. 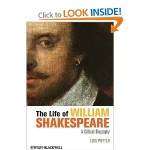 Lois Potter. The Life of William Shakespeare
Potter’s book is new this year. She’s a newly-retired, highly esteemed scholar and she has written a biography for the connoisseur. She writes with great authority on the plays as literary and theatrical texts, and on the theatre of the time, and includes discussion of Shakespeare’s collaborations. Each play has a few pages devoted to it, an approach none of the others takes. I’ve not had an opportunity yet to read this book in detail, but on first sight it certainly doesn’t disappoint. Probably not for the beginner though.

Samuel Schoenbaum. William Shakespeare: A compact documentary life
Schoenbaum’s reasonable, measured voice always persuades me that he must be right, but I’m aware that, written nearly 40 years ago, it may sound dated. Holderness certainly finds it so. He accuses him of “patrician prejudice”, finding him unwilling to recognise that Shakespeare could have undertaken manual labour in his father’s workshop, or to have poached deer not just as a juvenile prank but out of economic necessity. New readers might agree, but for anyone wanting to read up about Shakespeare’s life, I would still have Schoenbaum on my list. 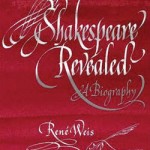 Rene Weis. Shakespeare Revealed
This is a very readable biography, less densely written than some of the others, and considers much evidence without being dismissive of it. Weis is a genial guide, sometimes perhaps a little too genial, and like Wood, he’s interested in the Warwickshire background, showing great interest in place-names. Unusually he suggests that many of the names mentioned in The Taming of the Shrew are correct, rather than being made up, as most assume. 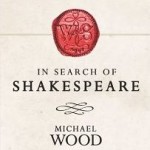 Michael Wood. In Search of Shakespeare
In Search of Shakespeare was published as a book at the same time as the four-part documentary of the same name was screened on BBC TV. Reading the book alongside watching the series would be a great introduction. Wood’s an enthusiastic guide who has made a special study of the history of Britain, so he’s very strong on Shakespeare’s Warwickshire background, while being generous to Anne Hathaway and allowing Shakespeare to be attached to his family. The emphasis on the “was Shakespeare a Catholic?” question is a bit too much for me at times.

So which, out of this selection, is the best biography of Shakespeare? All modern biographers are trying to get away from the idea which took hold in the Romantic period that Shakespeare was a solitary genius, and most are cautious about finding the man’s life in the plays though few are able to ignore it altogether. All have their good points, but Schoenbaum’s reading of the documents still gets my vote, so my recommendation would be to read him and bring him up to date with at least one of the others. You won’t go far wrong with any of them.

5 Responses to Lives of Shakespeare