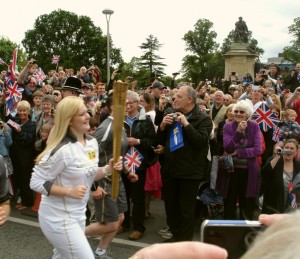 On 1 July the Olympic flame came through Stratford, passing over the ancient Clopton Bridge and past Shakespeare’s Birthplace on Henley Street before heading north. Earlier in the day it had passed though the beautiful Cotswold town of Chipping Campden. It was here that the first English Olympic games were held, and during Shakespeare’s lifetime.

A couple of months ago the four hundredth anniversary of the English Olimpick Games was celebrated. In 1612 Robert Dover, a lawyer, founded these games which took place on the hill which now bears his name.  Dover had the approval of King James 1. Sports that prepared and trained young men for battle were always encouraged, but the Chipping Campden games were always also about enjoyment and social cohesion. 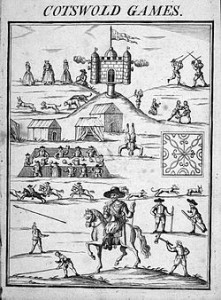 One poem about the games suggested that:
Thy sports are merely harmless, such they be,
Augment the bond of love and unity.

The association with the ancient Greek Olympics may have been an attempt to gentrify what could otherwise have been seen as just another English country festival. Dover patrolled the games himself on horseback, as you can see in the illustration.

Shakespeare portrayed the kind of festival which Dover was trying to rise above in the sheep-shearing festival in The Winter’s Tale. Even here there are classical references: Perdita has been decorated with flowers, “most goddess-like prank’d up” and she compares humble country flowers with the most important of goddesses:
violets dim,
But sweeter than the lids of Juno’s eyes
Or Cytherea’s breath.

There is dancing, singing, eating and drinking, but the rascal Autolycus is bent on picking pockets under the cover of selling trinkets and ballads. Although Shakespeare doesn’t mention the Chipping Campden games himself, they created quite a stir, and it would be surprising if he hadn’t heard of them from just a few miles away in Stratford. 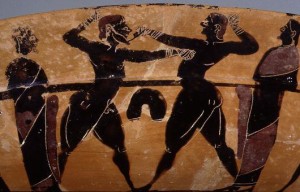 In the Ancient Greek Olympics poets, musicians and artists competed as well as athletes. Poems called Epinicians were written in honour of the victorious athletes by the most famous poets, and it may have been this link that sparked the idea for the book Annalia Dubrensia, published in 1636. This was a collection of poems praising Dover and his games written by some of the leading poets of the day, including Michael Drayton and Ben Jonson. A Stratford tradition held that it was a “merry meeting” with these two men that caused Shakespeare’s final illness.

Here is Michael Drayton’s poem, “To my noble friend Mr Robert Dover, on his brave annual assemblies upon Cotswold”:
As those brave Grecians in their happy days,
On Mount Olympus to their Hercules
Ordained their games Olympic, and so named
Of that great mountain; for those pastimes famed;
When then their able youth leapt, wrestled, ran,
Threw the armed dart; and honoured was the man
That was the victor; in the circuit there
The nimble rider, and skilled charioteer
Strove for the garland; in those noble times
There to their harps the poets sang their rhymes;…
So Dover, from these games, by thee begun,
We’ll reckon ours, as time away doth run.
We’ll have thy statue in some rock cut out,
With brave inscriptions garnished about,
And under written: Lo, this was the man,
Dover, that first these noble sports began.

Pierre de Coubertin, the founder of the modern Olympic Games, insisted on the link between sport, culture and education. From the first games in 1896 until 1948 medals were awarded for painting, sculpture and music as well as sport, and it’s only in the last 60 years that the Games have been completely taken over by the sporting competition. In 2012 the Cultural Olympics have been given considerable prominence as befits their location in one of the cultural capitals of the world. 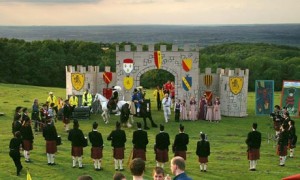 The Cotswold games then and now take place each year over the Whitsun holidays, in a natural amphitheatre on Dover’s Hill. Sports originally included wrestling, swordfighting, throwing the sledge-hammer, running, jumping and horse-racing. Echoes of many of these can be seen in today’s international Olympics.

The Dover’s Hill games stopped for a few years during the English Civil War and Commonwealth, and by the time they could be restarted Robert Dover was dead. They continued, degenerating into a standard country festival, until they were abandoned in the 1850s. In 1951, the year of the Festival of Britain, the games started again, but it wasn’t until 1964 that they became a regular, organised event and it’s now well-established. It remains a blend of cultural and sporting events, with a folk concert and this year, in honour of the London Olympics, some newly-composed Welcome songs. Traditional events like shin-kicking, a tug of war, and a five-mile race were held.  The climax of the festival is a bonfire, from which people light torches and walk down to Chipping Campden. Following the torchlit procession there is more music in the town square.

It’s a pity that the Olympic flame didn’t make it to Dover’s Hill but in being carried through the historic market-place it will have been a reminder of those first English Olimpick Games.