Stratford to Stratford: Opening the Olympics with Shakespeare 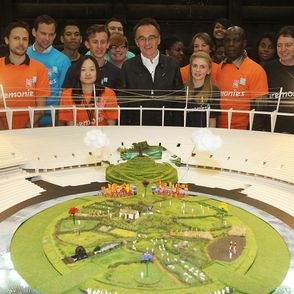 At last the London Olympics are about to begin. It’s estimated that a billion people worldwide will watch the opening ceremony on Friday 27 July. No pressure then on film director Danny Boyle, its creator. Clues about the ceremony have been filtering out, and here’s an article complete with film clip.

What was clear from early on was that Shakespeare was going to play a part in this opening ceremony with its title, “Isles of Wonder” inspired by The Tempest. It will open with the ringing of the  largest harmonically tuned bell in Europe, perhaps inspired by Ariel’s song Full Fathom Five, which ends “Sea-nymphs hourly ring his knell:/Hark! now I hear them, – Ding-dong, bell.”

The first part of the evening will feature England as a green and pleasant land, the kind of pastoral paradise celebrated in part of the British Library’s Writing Britain exhibition.

Details have been kept deliberately hazy, but the rural vision of the countryside will be overtaken by industrialisation and war before a celebration of the modern world of technology, multiculturalism and even the National Health Service. Clearly Boyle has decided to celebrate the British sense of humour and eccentricity as well as its history. One of the people who attended the dress rehearsal was interviewed on Radio 4 and while she refused to give away any of the details she described it as “surreal and eccentric, but pure pleasure”.

At some point Kenneth Branagh, who has brought Shakespeare to more people than any other through his films, and who’s performed many times with the RSC,  will deliver a speech from The Tempest, presumably that which has inspired the event, Caliban’s:
Be not afeard; the isle is full of noises,
Sounds and sweet airs, that give delight, and hurt not.
Sometimes a thousand twangling instruments
Will hum about mine ears; and sometime voices,
That, if I then had wak’d after long sleep,
Will make me sleep again: and then, in dreaming,
The clouds methought would open, and show riches
Ready to drop upon me; that, when I wak’d,
I cried to dream again.

It’s interesting that they’ve chosen to take inspiration from The Tempest, a play sometimes charged with imperialism (though at the time it was written England didn’t have an empire). In the dark side of the play a ruler is deposed by his brother, and sent off with his child in a rotten ship, clearly not expected to survive. It includes betrayal, murder and family hatred. But The Tempest is also a play in which love and reconciliation win out in the end, a reference to the positive ideals of the Olympic Games.

The Tempest is also a play full of magic, and we’re going to get a sense of the mystical landscape of the British Isles, both rural and urban. Boyle promised an opening ceremony where everyone will feel involved. He said “I hope it will reveal how peculiar and contrary we are – and how there’s also, I hope, a warmth about us.” 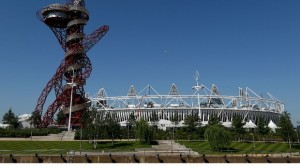 It certainly sounds like an Olympic opening ceremony like no other. Danny Boyle again: “Our Isles of Wonder salutes and celebrates the exuberant creativity of the British genius in an Opening Ceremony that we hope will be as unpredictable and inventive as the British people”.

As in Caliban’s speech, music will feature heavily with a rock festival at one end of the stadium and the Last Night of the Proms at the other. The musical soundtrack will include the themes from James Bond, Doctor Who and The Archers as well as the Sex Pistols’ irreverent song God Save the Queen. There will be a medley of  Indian-inspired medley of songs, and Paul McCartney is said to be going to round off the ceremony by playing a set.

In Stratford-upon-Avon there will be a huge 25 metre screen positioned outside the Royal Shakespeare Theatre showing us the action in the other Stratford. Founder of Stratford Vision, Denys Shortt suggested “how better to celebrate than to watch the opening ceremony outside the iconic RSC in Bancroft Gardens.” It’s going to be a huge treat to enjoy the ceremony and there’s sure to be a great cheer for England’s greatest cultural export in the Stratford where he was born.