Emptying the stage: experimenting with Shakespeare

It is up to us to capture [the audience’s] attention and compel its belief. To do so we must prove that there will be no trickery, nothing hidden. We must open our empty hands and show that really there is nothing up our sleeves. Only then can we begin.

This quotation from Peter Brook’s 1968 book The Empty Space appeared in the programme for his 1970 A Midsummer Night’s Dream. Last week I saw two Shakespeare productions in Stratford-upon-Avon that reminded me of Brook’s theory of performance.

The productions were Troilus and Cressida, a collaboration between the RSC and The Wooster Group in the Swan Theatre, and A Midsummer Night’s Dream (As You Like It), performed in Russian with surtitles in the Royal Shakespeare Theatre. 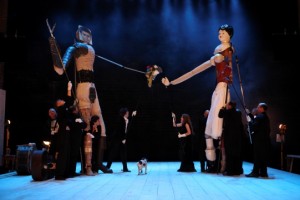 A Midsummer Night’s Dream began with the cast noisily removing a full-size tree that was lying across seats in the auditorium, followed by a metal fountain that sprays the audience with water. If you’re expecting to see the forest outside Athens, or Theseus’s court, you can forget it, they seemed to be saying. Instead we were in the world of slapstick, mime and circus. It soon became clear the only part of the play being performed would be the story of Pyramus and Thisbe, the play which the mechanicals perform for the court at the end of Shakespeare’s play. The cast lined up in front of us, motionless, while the screen behind them played an announcement for us to read. The actors had spent so long analysing and discussing every aspect of the story that they hadn’t had time to rehearse. The play wasn’t ready, so what we were going to see would be a rehearsal. The audience was already charmed.

And so the story began, played out by two 15′ high unwieldy puppets, skeletal figures, requiring the concentration of all the actors to move them. The simple act of Pyramus giving Thisbe a bunch of flowers took several minutes. Thinking about Peter Brook’s statement, there was very little up the actors’ sleeves, and they were certainly capturing the audience’s attention. The fun continued with singing, a quartet of ballet dancers and of course the performing dog. This playful approach, vividly theatrical and very funny, was communicated without the need for the spoken word.

Over in the Swan, it seemed to me they’d had the same problem, too many discussions about theory, not enough thought given to the actual performance. 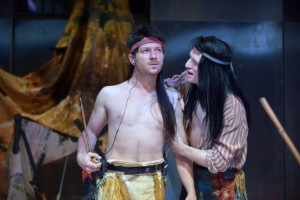 Troilus and Cressida‘s a notoriously difficult play about the Trojan War, neither comedy nor tragedy. The Trojans were played by the Wooster Group, Greeks by a group of RSC regulars, the two groups rehearsing separately. The Wooster Group’s performance style was, well, unusual. Dressed as American Indians, all miked, they reproduced the movements displayed on monitors positioned round the stage showing a film about an Inuit tribe which became a Hollywood romance for the love scenes between Troilus and Cressida. They spoke in flat monotones. I was told afterwards that over their earpieces the actors were hearing words in the accent being used, but not Shakespeare’s words. No wonder  the actors seemed so disconnected from the audience: their job was to reproduce what they could see and hear, and speak their lines, not to interpret them. They may not have been using illusions as such, but they did exclude the audience.

In a famous moment, Hamlet says the point of playing is “To show… the very age and body of the time his form and pressure”. The presentation felt to me like a warning against the over-use of technology in our time leading to losing the power to communicate, and the danger of copying the behaviour seen in Hollywood films.

It was ironic that the play was being performed in the Swan Theatre, the RSC’s most dynamic  performance space. The RSC regulars, playing the Greeks, brought an energy to the stage completely lacking in the Wooster Group. For me, though, it was too late. I was already too bored to be engaged.

I have to leave it to others to explain what this production says about the nature of theatre. It felt to me like a blind alley, but some people have loved it, and here’s a link to Andrew Cowie’s review which is followed by many responses.

This entry was posted in Shakespeare on Stage, Stratford-upon-Avon and tagged A Midsummer Night'd Dream, Andrew Cowie, dog, puppets, Pyramus and Thisbe, Russia, The Wooster Group, Troilus and Cressida. Bookmark the permalink.

4 Responses to Emptying the stage: experimenting with Shakespeare