Shakespeare and the Paralympics 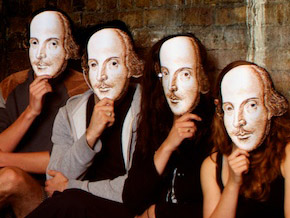 We’re now into the Paralympics, and once again Shakespeare is a highlight of the cultural celebrations. The pop-up Shakespeare project is bringing fifty actors including some who are deaf or disabled onto the streets of London. Performing extracts of speeches by Puck, Hamlet, Cleopatra and Juliet among others in “a random act of senseless beauty and an artistic ambush” the idea is they should take people by surprise, but you can get some forewarning of where the actors will be by registering here.

The Paralympics offers the opportunity to break down barriers and celebrate difference, not just in sport. Jonathan Moore is the director of the experience: ” Shakespeare wasn’t an Oxbridge type of person—he speaks to all people of all cultures. So why can’t he speak for and through physically challenged actors, deaf actors, and hearing impaired actors as well?”

In Shakespeare’s time, the medieval view that a deformed body indicated an evil mind was still held by many. By portraying Richard III as deformed, with a hunch back and withered arm, Shakespeare seems to agree.  Shakespeare’s Richard is not only evil, but cunning. He uses his deformity as a tool, a way of explaining his mood swings, for instance. But Richard is also the most engaging person in his play, and none of the able-bodied are able to compete with his energy, smartness, and humour. 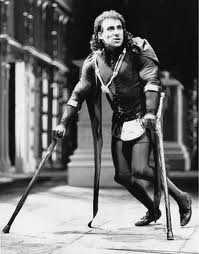 Some onstage Richards are weighed down by a deformed leg, making him lumber around the stage, making it difficult to understand the swiftness of his intelligence. But the RSC’s 1984 production, starring Antony Sher, brilliantly made the parallel between Richard’s character and his physicality.  His nimble wits were matched by the way he moved. On his feet he wore what looked like ballet pumps, and his crutches made him quick around the stage, the image of the scuttling spider. When necessary he also used the crutches as metal arm-extensions, weapons to catch his prey. Richard’s disability gave him an edge.

On 8 September a conference on Disability and the Renaissance is taking place at Leeds Trinity University College. Here’s the link to the programme.

That production made you see the play afresh. And last week I was reminded of another production that did the same thing, which by coincidence also featured Antony Sher.  I heard Professor Carol Rutter lecture on the subject of children in Shakespeare. She commented on how often the image of the “phantom child” haunts Shakespeare, never more than in The Winter’s Tale.  Mamillius is the son of Leontes. and reminds him of his own childhood:
Looking on the lines
Of my boy’s face, methoughts I did recoil
Twenty-three years, and saw myself unbreeched,
In my green velvet coat…
How like, methought, I then was to this kernel.

Almost as soon as the play starts, Leontes is consumed by mistaken, violent jealousy towards his wife. Professor Rutter suggested that The Winter’s Tale offers a “troubled and complicated account of childhood”, and Mamillius who ought to be a restorative to his father is somehow implicated in the adults’ guilt. “Go, play, boy, play: thy mother plays, and I/Play too”.  In the RSC’s 1999 production  Mamillius was a wheelchair-bound boy, and it was as if the boy’s disability was a direct result of the father’s guilt. All the comments made about him being “A gentleman of the greatest promise” and “a gallant child” had added poignancy in Leontes’ gloomy court.

When his mother is publicly proclaimed guilty by his father, Mamillius dies, is lost.  His sister, Perdita, has already been lost by being banished at birth, branded a bastard by Leontes. And the second half of the play, set sixteen years later, tells the story of how she is found and returned to her repentant father. In this production the parts of Mamillius and Perdita were doubled by Emily Bruni, making the image of the finding of the lost child even more powerful. Perdita was literally a reincarnation of Mamillius, and we first saw her decorated with flowers, the Mistress of a country sheep-shearing feast, with the healing power to turn the tragedy of the first part of the play into joyous life.

Sport brings new life to people facing disability, enabling them to concentrate on what’s possible rather than dwelling on what isn’t. The Paralympics are a celebration of their determination. With The Winter’s Tale, Shakespeare too aimed to turn tragedy into triumph.