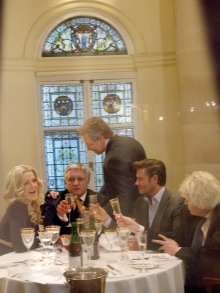 Programme for Timon of Athens

Theatre programmes don’t often include an article written by the leading man in the production. Most actors and directors let their work speak for them, and drawing attention to their past successes might be courting disaster. Actors can be a superstitious lot.

Simon Russell Beale, though, is not most actors. And the piece in the National Theatre’s current programme for Timon of Athens wasn’t written specially, but is an extract from a lecture he gave to the British Psychoanalytical Society in 2009 on the subject of acting Shakespeare. In it, he analyses leading roles which he has played, giving us a peep into his working methods.

His approach is based on a full understanding of the text, ensuring he can “support his reading with carefully reasoned argument”. He’s always looking for the chink in the armour of Shakespeare’s characters, chinks that Shakespeare has put there. Talking about Othello, in which he played Iago, he describes how in the source for the play Iago and his wife have a child, a detail which Shakespeare deliberately omits. He found their barren marriage and “Iago’s unspoken blame of his wife, irresistible” in performance.

We’ve recently seen him playing Falstaff in the BBC Hollow Crown series: Beale was neither a warm father-substitute nor a scheming opportunist, but a survivor, aware of his value to the prince as entertainer . At the moment when he realises that Hal may drop him when becomes king: “Banish plump Jack, and banish all the world”, there was real anxiety in his eyes. No matter how confident his character appears, there’s always an insecure, vulnerable human being underneath.

I remember seeing this when he played Richard III at The Other Place in Stratford. The face he showed to the public was jovial, but to the audience he revealed himself as a monster. When one of the little princes, his nephews, jumped on his humped back, unseen to the child his uncle’s face blackened and he struggled to stop the mask slipping. Without knowing it, the boy had found the chink in Richard’s armour.

As Ariel in The Tempest in 1993 Beale was unemotional, expressionless. But towards the end of the play, just before being given his freedom by Prospero, Beale spat in his face. There was an audible gasp from the audience. This wordless gesture made sense of his performance in the rest of the play, the hidden anger of the servant towards his master. It was an extraordinary theatrical moment which was so hated by some that when transferred to London it was cut. 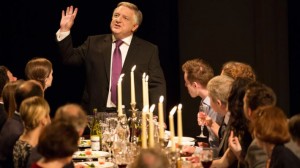 Timon of Athens is a play of riches to rags. A wealthy man, he delights in sharing his fortune with his “friends” who, predictably, desert him when he falls into debt. The second half of the play finds him living in the wilds, impotently raging against mankind. In all its a play for our time. The National Theatre’s production is beautifully judged: we recognise almost every scene as a place in modern London, beginning with the champagne reception for the opening of “The Timon Room” in the National Gallery under El Greco’s painting of Christ casting the Moneychangers out of the Temple. The set takes us to different parts of London: the HSBC tower in Canary Wharf, the Houses of Parliament, the street of elegant eighteenth-century houses in which Timon lives.

Timon is represented as a man without family or emotional ties, and in a lovely touch his usually male steward is played by Deborah Findlay who at first could be taken for his wife. Only gradually does it become clear that their relationship is professional and she’s his Personal Assistant. 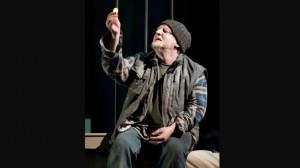 The play starts with the tent city that we saw outside St Paul’s Cathedral in 2011. When Timon loses his money and social position he goes on the streets with them, filling his shopping trolley with bits of cardboard and plastic. The “roots” which he digs out of the ground in Shakespeare’s play become, of course, the leftovers of ready meals and takeaways which he finds in binbags.

This is a spot-on production of what’s probably Shakespeare’s least popular play, and one which will make many converts, but occasionally the modern parallels are strained. In the second half the military leader Alcibiades threatens his own city before successfully negotiating a peace with its leaders. Here it isn’t clear if he’s the leader of the tent city protesters, orchestrating the London riots, or a leader of the IRA. In the final scene the parallel is clear: he abandons his followers and ends up wearing a business suit sharing the conference table with London’s politicians. Timon’s death is barely noticed.

In one of his final scenes, Timon spits at his PA. She doesn’t deserve it: she’s remained loyal to him and refused to join in the mudslinging practised by the cynic Apemantus. He’s exhausted all his words, and perhaps the spit expresses his anger at his own naivety as well as the behaviour of the rest of mankind.

This production is to be screened nationwide on 1 November as part of National Theatre Live.  You’ll find more information about the production here.