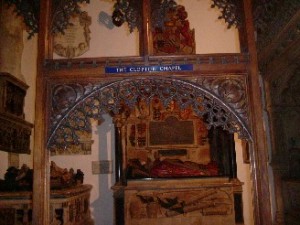 Most visitors to Holy Trinity Church make a beeline for the monument to Shakespeare in the chancel. It’s not surprising, but doing so means visitors miss a number of other things in the church which have a Shakespeare connection.

One of these is getting a lot of attention just now because restoration work is under way. This is the Clopton Chapel, which contains three large tombs and other monuments. And, for the next few weeks, a lot of scaffolding.

The plainest of the tombs, on the right as you look at the chapel, is the tomb of Stratford’s great benefactor Hugh Clopton himself, the man who left Stratford, went to London, where he joined the Mercers’ Company and became rich. In 1491 he became Mayor of London, and his gifts to the town included the building of the stone-built Clopton Bridge and the rebuilding of the Guild Chapel that stands across the road from the site of New Place, the grand house which he built and which a century later William Shakespeare bought. The intriguing thing about the tomb is that it is empty. His will, made not long before he died, set out his wishes:
If it fortune me to decease upon Stratford-upon-Avon or in that country, then my body shall be buried in the parish church of the same. I will that my body be brought of ground with four torches and four tapers and no more. I will that the priests of the college and of the guild in Stratford-upon-Avon sing pacebo and dirige with orther orisons accustomed after Salisbury use, and mass of requiem for my soul every day for a month if I be buried there.

Sadly Hugh Clopton died in London in 1496 so he was buried in the church of St Margaret Lothbury and the tomb which he had planned remained unused.

The second tomb, on the left, is that of Hugh Clopton’s great-grandson William and his wife Anne, and it includes effigies of both. He died in 1592, she in 1596. Above the tomb is a representation of their seven children, three of whom died in infancy. Their sole surviving son, also called William, was their last born but also died young so their estate passed to the only two surviving daughters, Joyce and Anne.

The third tomb in the chapel is that of Joyce and her husband George Carew. It’s  the most impressive tomb in the church and has been described as the finest renaissance tomb in all England. Were it not for the Shakespeare monument (a very humble affair by comparison), the tomb would attract a lot of attention. Carew was a seriously important person who became Baron Clopton and Earl of Totnes. He served Elizabeth 1, James 1 and Charles 1, under James 1 becoming Master in Ordnance: the front of the tomb is decorated with barrels, cannonballs, flags and cannon, the symbols of his responsibilities. Carew died in 1629 at the age of 73, and his wife died in 1637 at the age of 78. They were married for almost 50 years. It seems likely that Shakespeare knew both William Clopton and George Carew, and even more likely Joyce Carew nee Clopton who was only a few years older than him. 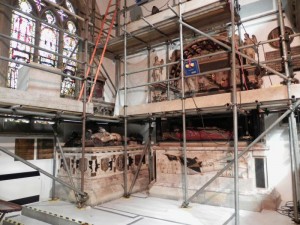 Clopton Chapel with restoration in progress

It’s exciting to see work going on in the chapel as it gives an opportunity to find out more about the history of the tombs. The monuments have been restored a number of times before, and analysis of the paint is showing how colours have been changed and how they have been affected by pollution. Those working on the monuments at the moment are cleaning but not repainting except to clarify inscriptions and consolidating areas of decayed stonework so they won’t be complicating the story of these monuments any further.

Information about Holy Trinity Church can be found at their website, and there is a mobile phone app for the church which includes a 360 degree panorama of the chapel.