The Tempest in Bangla, performed at the Globe

I’ve written before about the many great online resources that exist for those interested in Shakespeare in performance on stage and screen, but just recently several new ones have been launched specially for teachers. One of the best of the existing sites is The Space, launched in May, which provides free access to many staged productions. It’s just been announced that it’s life is being extended for at least six months, but the Globe to Globe films of the 37 plays performed at the Globe theatre, each in a different language, will only be available until the end of October. So if you want to catch these exciting productions you need to devote a few evenings to them soon. They’re not completely lost after that date but you’ll need to visit to the Globe’s archive to see them.

Another reason for visiting The Space is to increase the viewing figures in the hope of persuading those who hold the purse-strings that this site should be encouraged. An article just published points out that The Space hasn’t been well-publicised because is has little money for marketing although the Guardian and the Globe itself have both been promoting it. So do take a look: even without the Globe to Globe videos it’s very much worth keeping. One of the treasures now available is the collection which was issued under the title Silent Shakespeare, including some of the earliest films made of some of the plays.

Meanwhile there are other possible platforms: the British Film Institute has recently set up a YouTube channel which has gained 30 million hits in its first months, way in excess of what The Space has achieved. It covers a much broader range of subject matter: there are no hits for Shakespeare as yet. But the BFI has ambitions for its online presence: it’s going to be launching its own version of IPlayer by the end of 2013 and over the next five years will be making available 10,000 films from its archives.

The British Universities Film and Video Council is also moving forward on several fronts. As well as its outstanding Shakespeare on Film, TV and radio catalogue it’s recently launched The Shakespearience for IPad. This can be seen as an enhanced e-book that uses the IPad’s touchscreen to bring Shakespeare’s plays to life in different ways. Based around text, the program includes some scenes from filmed Shakespeare and commentaries by well-known people including actors and  professional voice coaches. Also included are interviews with directors as well as images of set and costume designs.

The same organisation has launched a database called TRILT, the Television and Radio Index for Learning and Teaching. Access to the full database, including information about broadcast material from 1995 on 475 channels is only available to the paid-up members of BUFVC (many of which are educational organisations), but some information is available to all users. The database expects to grow by a million records a year. 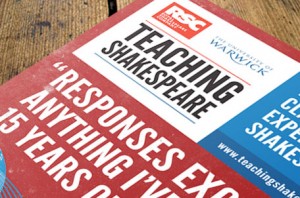 While we’re on the subject of paid educational resources, take a look at the RSC’s Teaching Shakespeare resource  which offers online professional development for teachers. There’s a video online to view and you can also take a look at some free sample content. 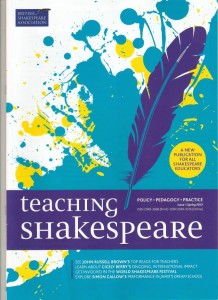 It’s free to BSA members or can be purchased separately (find out how on the Education Blog front page). It contains lots of information and discussions on the subject of teaching Shakespeare to schools.  Issue 1 is available as a free sample at the BSA’s education blog

And another new digital educational resource is the Routledge Performance Archive, developed in conjunction with Digital Theatre. This includes 40 hours of audiovisual content, as well as critical material from Routledge’s own publications. Organised by subject and practitioner the content can also be uncovered by using the keyword list. It’s for use in libraries and classrooms and available by subscription, though they offer a free trial. New content, covering the entire spectrum of theatre topics, will be added every three months.

I hope you’ll find some of these will feed your enthusiasm for Shakespeare in the coming months.