Shakespeare and Hallowe’en: not just Macbeth 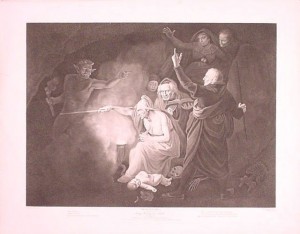 The Elizabethan and Jacobeans had superstitions covering almost every area of life. Supernatural explanations for natural phenomena were widely accepted: the appearance of a comet in 1577 caused public alarm, and even historian John Stow believed the story that the striking of a church spire by lightning was the work of the devil. Hallowe’en was the focus of these fears.

We still seem to need witchcraft today, even if for most of us it’s just entertainment. TV and films are full of magic, ghosts, vampires, zombies and extra-terrestrials. That great writer of fantasy, Philip Pullman, has just published his version of fifty of the best of Grimm’s Fairy Tales, and these scary folk stories have retained their popularity in spite of their lack of context, character or motivation. One interviewee commented that the stories are “Events, events, events”.

Right from the beginning of his writing career, Shakespeare was intrigued by superstition and magic. When we think of his use of witchcraft, we immediately think of Macbeth and the three weird sisters, but as so often, Shakespeare had tackled the issue before.  The first history play he wrote, Henry VI Part 2, included the germ of the idea.  Here too, a wife, Eleanor Duchess of Gloucester, tries to persuade her husband, the Lord Protector, Duke Humphrey, to “Put forth thy hand, reach at the glorious gold.”

Unlike Macbeth, Humphrey will have none of it, so behind his back Eleanor aims to “remove these tedious stumbling-blocks” by resorting to magic. Another character, Hume, promises to show her “A spirit rais’d from depth of under ground/That shall make answer to such questions”. 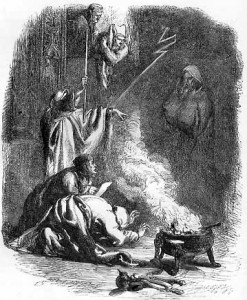 And so in Act 1 Scene 4 a conjuration is staged. It is
Deep night, dark night, the silent of the night,
The time of night when Troy was set on fire,
The time when screech-owls cry, and ban-dogs howl,
And spirits walk, and ghosts break up their graves.

As in the apparition scene in Macbeth a spirit makes prophecies about the future. It must have been a frightening, but thrilling scene for the suggestible audience.

It’s tempting to see Henry VI Part 2 as “events, events, events,” as there is so much plot. When first published in 1594, its title was The First part of the Contention betwixt the two famous Houses of Yorke and Lancaster, with the death of the good Duke Humphrey: And the banishment and death of the Duke of Suffolke, and the Tragicall end of the proud Cardinal of Winchester, with the notable Rebellion of Jack Cade: and the Duke of Yorke’s first claim unto the Crowne. But the story of the downfall of Humphrey the Lord Protector shows us Shakespeare’s interest in politics as well as witchcraft. Just after Eleanor has revealed her ambitions to the audience, Hume, the man she has paid to raise the spirits for her, reveals that he is in the pay of two other courtiers, the Duke of Suffolk and the Cardinal of Winchester. She has been set up, and even though her husband has no part in her plot their aim is to precipitate his downfall through the plotting of his wife. At the end of the conjuration scene she is caught red-handed.

In Shakespeare’s main source, Halle’s Chronicles, the story is much simpler. Eleanor attempts to put her husband on the throne and for the purpose she employs witches who “devised an image of wax, representing the king, which by their sorcery, a little and little consumed, intending thereby in conclusion to waste, and destroy the king’s person”.  There’s no mention of anybody being in the pay of nobles, no raising of the devil, no dramatic scene to stage.

Shakespeare’s play shows that right from the beginning of his career he’s aware how politics works, and his play mirrors contemporary events: the Queen had been the subject of several plots during her reign and uncertainties about religious belief and the lack of a clear successor contributed to the sense of unease. In the play the country is full of plots, of jealousy and suspicion. Saunders Simpcox is the original benefits fraudster and the Duke of Suffolk is suspected of fiddling his expenses incurred while on government business.

Finally the Duke of York pays Jack Cade to lead a rebellion which he hopes will lead to himself being crowned:
I will stir up in England some black storm
Shall blow ten thousand souls to heaven, or hell;

In this atmosphere, witchcraft flourishes. Henry VI Part 2 was so successful that he wrote sequels and the prequel Henry VI Part 1. It was this tetralogy, with its supernatural scenes, that firmly established Shakespeare as the leading playwright of the day.

If you’d like to read more, New York’s University Library has a great subject guide on Shakespeare and witchcraft which includes links to several online resources.

One Response to Shakespeare and Hallowe’en: not just Macbeth