So who did invent the Shakespearean Theatre? 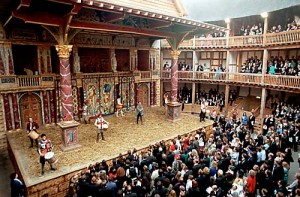 Who invented the “Shakespearean theatre”? Burbage and Shakespeare and/or Henslowe and Alleyn?  This is the title of a one-day conference being held at the University of Reading this Saturday coming, 24 November.

Because Shakespeare is now the most famous playwright from the period we tend to think he dominated the theatre world of the late sixteenth and early seventeenth centuries. But was this true? The conference will discuss the Shakespearean theatres as physical entities as well as the plays and theatre practices which went on in them. Were Burbage and Shakespeare really in competition with Henslowe and Alleyn or was the relationship more complicated?  And what about the other companies about which we know less?

The conference is organised by Professor Grace Ioppolo and brings together some of the most important people in the field, including senior academics Reg Foakes, Andrew Gurr and Stanley Wells, members of the Museum of London Archaeology team who have excavated the remains of many of the theatres, and other leading scholars. It’s aimed not just at academics and students but also at actors, directors and theatre aficionados. Registration is about to close so get your skates on if you want to be there. If you can’t make it, here’s a link to a podcast from the National Archives by Grace Ioppolo on a similar subject.

And the Henslowe-Alleyn digitisation project is a great resource for digital information on the subject.

On the subject of Shakespearean theatres, it’s just been announced that Lottery funding has been awarded to a project aiming to draw up plans for further excavations of the Rose Theatre site and to plan the delivery of educational resources and performances.

In an unexpected development, a link has been drawn between Shakespearean theatres like the Rose and another theatre which is currently being restored, the Bristol Old Vic. 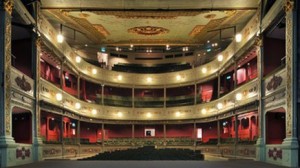 This building dates from the mid-eighteenth century and is the oldest functioning theatre in existence. The exploration has found that originally, like theatres in the Shakespeare period, it had a thrust stage. It has always been thought that once theatres moved inside and adopted the use of lighting and scenery a picture-frame or proscenium arch stage was developed. The thrust stage encourages much more audience participation and it seems that the atmosphere was more like “a speakeasy or nightclub”. It’s known that the audience for Shakespeare’s theatre could be rowdy but it appears that this may have continued much longer than had been thought. This discovery may in itself cause a reassessment of theatres in the eighteenth century.  Technical information is in this article from Lighting and Sound International.

For anyone interested in the history of theatres in the UK, I’d recommend the Theatres Trust website. This organisation aims to protect the UK’s theatres and to champion their future. And they’re also interested in what makes a good theatre. To that end its website includes a database of theatres, an image library, information about the history of theatres and theatre decoration, stages and auditoria. There are also a series of downloadable resource sheets for teachers.

6 Responses to So who did invent the Shakespearean Theatre?