Adapting Shakespeare’s Henry VI: The Wars of the Roses 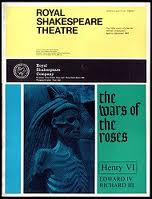 Until a few years ago the Henry VI plays were rarely performed, especially outside Stratford-upon-Avon, so the news that next year Shakespeare’s Globe is going to be touring the plays to venues in the UK is to be welcomed.

I’ve featured the plays on this blog many times because their themes are still so current. After years of neglect they began to be recognised in the 1960s, when the newly-founded RSC took the daring step of performing Henry VI and Richard III, conflating four plays into three under the joint title The Wars of the Roses. Reshaping was unusual, but the plays as written were thought to be virtually unplayable. Peter Hall and John Barton (who did the rewriting, as well as sharing the direction) were earnest advocates for these plays: Hall wrote “We are forced to experience the passionate responsibility of mother to son, of king to country, of people to king, of blood to blood.” Their faith was justified as the relevance of the plays in the second half of the twentieth century was quickly appreciated. Hall explained why they were unpopular during the nineteenth century: “it was hoped then that such horrors were past. We know now that this optimism was premature”.

The Wars of the Roses became the defining production of the fledgling RSC, struggling to create its own identity. It opened in 1963, transferring to the company’s London home the Aldwych Theatre before returning to Stratford for the quatercentenary year of 1964 when they were joined by Richard II, Henry IV and Henry V to form a history cycle.  The company was led by Peggy Ashcroft as Queen Margaret, one of the country’s leading actresses already well known in Stratford for her performances as Rosalind, Portia and Cleopatra, and Donald Sinden who played York. She was joined by promising but little-known actors who were to become household names such as David Warner playing Henry VI, Janet Suzman as Joan of Arc and  Ian Holm as Richard III. 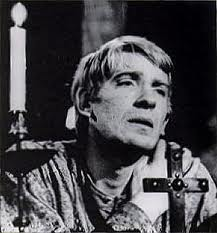 According to Richard Pearson, who has documented the productions in his book A Band of Arrogant and United Heroes, the RSC had already made a “happy and friendly deal with the BBC to televise a certain amount of productions”, so the decision to televise The Wars of the Roses was not difficult. The plays were filmed between 20 November and 18 December at the end of the 1964 season. The RSC’s Annual Reports state “it was the biggest and most ambitious outside drama recording BBC TV has done”. For contractual reasons it was filmed out of order, Richard III first, followed by Henry VI and Edward IV. The films were shown in the UK on successive Thursday evenings between 8 and 22 April 1965, repeated between January and March 1966, and also televised in the USA. 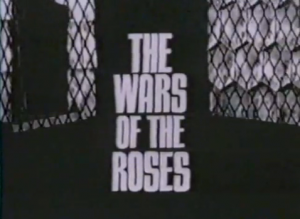 Recently the Screen Plays blog has featured a terrific post about the published text of the adaptation which also explains how the filming was carried out using the stage rather than trying to transfer the production onto a set.  It was a complicated business. The issue of how to film live theatre performances has been discussed over and over again in the past twenty-five years, but right back in 1964 Michael Bakewell was already “intent on finding a new way of presenting Shakespeare on television… not merely to observe it but to get to the heart of it”. A structure was built above and behind the stage, and a pit at the front of the stage. “Eight cameras were used, including a special Japanese hand-held camera which could penetrate into the battle scenes”. And a platform was built right across the auditorium on which to stand these cameras. Many scenes had to be re-staged, but this didn’t create problems for the actors because they had been in performance for eighteen months already.

Both Hall and Barton found filming stimulating. Barton commented on how well the soliloquies, of which there are many, worked on TV, and Hall found “The closer you shoot, the more the words mean”.

The RSC’s Annual Report, again: “The series was acclaimed by the television critics and seen by about eight per cent of the population of the United  Kingdom”. which must have been one of the largest TV audiences for any Shakespeare, let alone such obscure plays. It remains an outstanding achievement. Incidentally the Screen Plays blog includes a link to part of the film, all of which is currently available on YouTube.

2 Responses to Adapting Shakespeare’s Henry VI: The Wars of the Roses