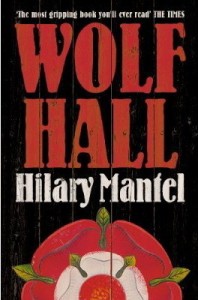 I’ve only just got round to reading Hilary Mantel’s 2009 novel Wolf Hall, the first of a trilogy (the third part still being written) about the life of Thomas Cromwell. Both Wolf Hall and its sequel Bring Up the Bodies have won the Man Booker Prize, and you can hear Hilary Mantel talking about Wolf Hall in this podcast. Thomas Cromwell became a great influence on the reign of Henry VIII, his marriages and the religious upheavals of the time, but he’s not one of the colourful figures who are usually the subject of books on the period.

The book of course reminded me of Shakespeare and Fletcher’s play Henry VIII, covering much the same period. It’s meticulously researched: Mantel took 5 years to write the 600-page book, and made sure as she did so that she stuck as closely to the facts as she could. Shakespeare did do research: he took his history from his usual source Holinshed’s Chronicles, as well as other minor sources, but nobody could call him meticulous and it’s a good example of how he ignored the actual sequence of events in order to tighten the structure of his play. In his version things move swiftly up to the marriage with Anne Boleyn, whereas Mantel documents the gradual inching forward that in reality took years. And Shakespeare re-orders historical events: reading the book I found myself anticipating Katherine’s death, one of the most notable scenes in Shakespeare’s play, having forgotten that in fact she died several years after Elizabeth’s birth and the execution of Thomas More, both of which occur in the book.

Both Mantel and Shakespeare stress Cromwell’s faithful service to his master Wolsey, even though he gained by his downfall. In this passage, thought to be written by Fletcher, Wolsey advises Cromwell to be an honest servant, rather than a scheming politician: 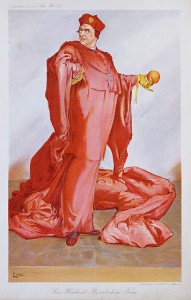 Cromwell, I charge thee, fling away ambition,
By that sin fell the angels; how can man then,
The image of his maker, hope to win by it?
Love thyself last, cherish those hearts that hate thee;
Corruption wins not more than honesty.
Still in they right hand carry gentle peace
To silence envious tongues. Be just, and fear not;
Let all the ends thou aim’st at be thy country’s,
They god and truth’s: then if thou fall’st, O Cromwell,
Thou fall’st a blessed martyr.

From Shakespeare’s day to today, we have been obsessed with the Tudor period: the colourful lives of the monarchs, the complex rises and falls of both the servants of the crown and the nobility, the fact that ordinary people could make their way into the highest offices of the kingdom. Shakespeare and Fletcher weren’t the first to write a play about about this period of history: Sir Thomas More  and Thomas, Lord Cromwell are both earlier.

Mantel’s writing successfully conjures a constant sense of threat and unease, the damp darkness of houses, the appearance and feel of clothes. And like Shakespeare, Mantel is fascinated by how politics works, how power transfers from one person to another and how events come to be shaped. Her Cromwell is a master of persuasion, and it’s no surprise to find in an interview that she has long admired Shakespeare’s work:
“I came to Shakespeare very early,” said Mantel. “When I was about eight I found somewhere a black, grimy, ancient-looking book called Steps To Literature: Book Five. And in it there was a piece of Shakespeare, an extract from Julius Caesar … The crowd has been on the side of the conspirators and Brutus, but Antony, by a feat of rhetoric, turns them around so that they become not a crowd but a mob and they are hunting for the conspirators through Rome….Everything I have done is somehow wrapped into that scene. I have been concerned with revolution, with persuasion, with rhetoric, with the point where a crowd turns into a mob; in a larger sense, with the moment when one thing turns into another, whether a ghost into a solid person or a riot into a revolution. Everything, it seems to me, is in this scene.”

Both writers knew how Cromwell’s story would end, with his eventual execution by the King who he served as faithfully as Wolsey had advised. Mantel’s ability to depict the foibles of the monarch and the Machiavellian scheming of the nobility highlights the constraints under which Shakespeare was forced to write, diplomatically ending his play with the triumphant christening of the Princess Elizabeth. Definitely a good read, a TV mini-series of the first two books is currently being planned, which is expected to be screened towards the end of 2013.