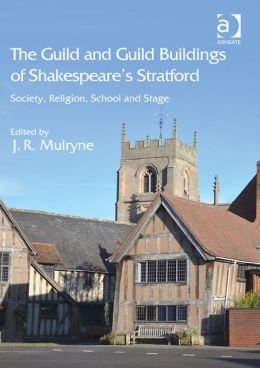 Any guide to the town of Stratford-upon-Avon will mention the buildings of the Guild of the Holy Cross and their association with William Shakespeare and his family. For it was here Shakespeare almost certainly received his education and here he probably saw his first plays. The importance of the buildings in the history of the town is less frequently considered.

The well preserved-buildings are some of the most striking in the town, and, remarkably, are still used for the purposes for which they were constructed over five hundred years ago. The complex is made up of the Guild Chapel, the Guild Hall with the schoolroom above, the alms houses and additional buildings tucked away behind. A new book, The Guild and Guild Buildings of Shakespeare’s Stratford: Society, Religion, School and Stage, edited by J R Mulryne and published by Ashgate, seeks to put these buildings and the Guild for which they were erected in the spotlight. This collection of essays is written by ten scholars with a variety of expertise from archaeology to historic archives and theatre history. Several of these contributors have been associated with the town for more than thirty years and bring a wealth of knowledge to the subject.

I’ll be writing further blog posts looking at two particular aspects of this book, the school and the performances which took place in these buildings.

The Guild itself dates back to the thirteenth century, a religious foundation which over the years became more and more secular and provided much of the government of the town. Mairi Macdonald has already published a transcript of the Guild’s membership register dating from 1406 to the dissolution in the 1540s, and her chapter in the book is based on her findings. Both the clergy and laity were involved with the Guild, and members were drawn not just from the local area but also from Coventry, London, Bristol and even Cumbria. Local members stated their occupations which illustrated “an economy focused on the food, clothing and building trades: bakers, butchers, millers, weavers, tailors, walkers (fullers of cloth), shoemakers, drapers, hosiers, glovers, carpenters, smiths and slaters”. The surviving accounts also demonstrate how much building and rebuilding took place, and the part played by a few wealthy benefactors in this process. 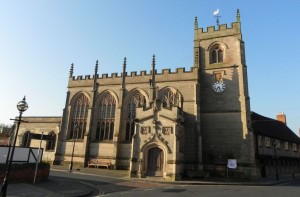 The Guild Chapel, and the Guild Hall to the right

Sylvia Gill’s chapter on the Reformation looks at the effect of the sixteenth-century’s religious upheavals on the Guild. Both the town’s religious institutions, the Guild and the College, were dissolved, with the thirteen priests in the town being reduced to one, the others offered pensions. Surviving documentation, amazingly, allows us to know the names of some of these priests and even what happened to them, most of the younger men eventually finding positions elsewhere. Personalising these stories emphasises the difficulties experienced by those who lived through the religious upheavals of the decades before Shakespeare was born.

Robert Bearman’s chapter and its companion by M A Webster focus on the process by which the town moved towards independent governance after the Reformation and how this change affected the Guild buildings. Several of the people most dominant in the affairs of the Guild also became burgesses in the newly-formed Corporation, and the Guild Hall carried on being the focal point of civic life, holding the hearings of the court of record which handled relatively small financial claims, important in a community so dependant on commerce.

It’s rare to find buildings like this still standing, rarer still that they still carry out many of the functions for which they were intended. The book also includes the results of archaeological surveys that have provided much new information about the development of these buildings. But it’s the existence of the documentary sources that complete the picture, allowing the authors to put flesh on the bones by personalising these buildings and providing additional evidence.

Just as the study of Shakespeare’s plays has tended to encourage a view of him as a solitary genius rather than a writer among writers, a Shakespeare-centric view has prevented us from seeing that Stratford was a town governed in an orderly fashion by an organisation that had been taking care of the spiritual, educational and social needs of its residents for centuries before his birth. This timely collection brings a new depth to the history of Stratford and to the background of its most famous son.

2 Responses to Stratford’s Guild: the background to Shakespeare’s town