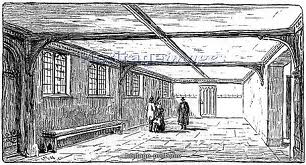 It’s refreshing to be made to rethink something you have always accepted as fact, and J R Mulryne’s The Guild and Guild Buildings of Shakespeare’s Stratford challenges some of the received wisdom about these ancient buildings.

This is true throughout the book, but never more so in the chapters which talk about the functions of the Guild Hall and the School Room which was built above in the 1560s. Guide books all tell us that the upper room was used for the school, whereas the lower Guild hall was used for meetings of Stratford’s town council, and for the performances of visiting professional acting companies which played in the town from 1568 onwards. The vision of John Shakespeare in his robes of office, sitting in pride of place with his little son William seeing his very first play, is irresistible.

And it may well be true, but several chapters in this book raise questions about the functions and layout of these rooms which may surprise those who like me thought it was straightforward. To begin with, the chapters about civil governance in the Guild Hall suggest a complicated picture. The Guild Hall was used not just for council meetings, local feasts, plays and hearings relating to local breaches of the peace, but for a whole range of other events. The list includes full trials for serious offences requiring a jury of twelve men, trials overseen by visiting justices of the peace, and the entertainment of  important visitors such as the Earl of Worcester.

All these are the sort of events that Shakespeare often incorporated into his plays. Think of the council meetings in the history plays, court hearings in Measure for Measure, the preparations needed for the theatricals in Hamlet or a banquet like Capulet’s in Romeo and Juliet where the servants are encouraged to make room: “turn the tables up”, and “Away with the joint-stools, remove the court-cupboard, look to the plate”. This was a multi-purpose building that Shakespeare knew well.

I found the three chapters which focus on the visits of professional troupes of players particularly interesting. J R Mulryne, in collaboration with a number of historians, has examined the records of these performances and suggests there is much still to find out. Travelling players were required to perform in front of the civic authorities before being licensed to play elsewhere in the town, and it is thought that this performance would have taken place at the Guild Hall, the players then being able to perform elsewhere, probably one of the town’s large inns. 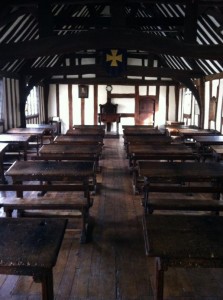 It’s always assumed this was in the lower Hall, but Mulryne makes the sensible suggestion that it may have been the upper or school room that was used for performances rather than the ground floor Hall. This room has a rather low ceiling and the upper room would allow more freedom to the actors as well as better visibility for the audience. He also suggests that some performances might have taken place out of doors in the courtyard behind the Guild Hall.

Mulryne also finds a link between the status of the patron of the company of actors and the amount which they were paid: the three main companies playing in Stratford were the Earl of Worcester’s Players, The Earl of Leicester’s Players and the Queen’s Men. All the recorded visits are listed in the book, and although we know the approximate dates of these visits neither the names of individual members of the companies nor the plays which were performed were listed. But here is where other records fill in the picture, giving us details of the size of the companies and what plays were in their repertoire. Margaret Shewring in her chapter explores much of the evidence while Oliver Jones explores one play in particular, The Troublesome Reign of John, King of England (the relationship to Shakespeare’s play on the same subject is much argued over) discussing how it might have been staged within Stratford’s Guild Hall, and by whom. 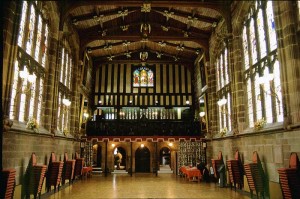 The Guild Hall in Coventry, another touring venue

Records of Early English Drama, or REED, is a Canadian project that over the past thirty-five years has undertaken a county-by-county survey of performances up to 1642. Many volumes are now complete, and are gradually being made available online, making it possible to build up a picture of how touring companies moved around the country between towns and the houses of the nobility. It’s also allowed researchers to find, for instance, that although Stratford is an average-size town it had for many years a larger than average number of visits from acting companies.

After 1600 there were increasing restrictions on the visits of acting companies: the 10 shilling fine if players performed in 1602, became in 1612 the eye-watering amount of £10, a twenty-fold rise. But it has recently been noticed that only six months after this increase there was a reduction to the more sensible level of £2. I like the thought that Shakespeare had bought the large house just across the road from the Guild Hall and by 1612 was, it is thought, semi-retired. I wonder if he was amused or irritated by this ban on the performance of the plays which he had spent his life writing, and which had made him a wealthy member of Stratford society.