This morning Richard Buckley, head archaeologist at Leicester University, has stated that “beyond reasonable doubt”, they have reached the “sound academic conclusion” that they have found “Richard III, the last Plantagenet King of England”. Richard’s death at the Battle of Bosworth Field in 1485 has always been beyond doubt, but local tradition had held that his body had been thrown in a local river. For centuries nobody knew the truth.

In a long drawn-out press conference lasting nearly 40 minutes, a tableful of experts gave their evidence, culminating in the most hotly-awaited news, that the DNA did match. Who could blame them, or for celebrating at the end of the announcements? 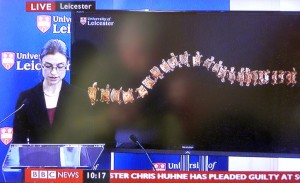 The most compelling and gruesome evidence came from the forensic examination of the skeleton itself. It had ten wounds, eight on the head, including the fatal blow from a halberd or large bladed weapon to the base of the skull, and lesser injuries to the face. These, and two further injuries to the rib and the pelvis were, it’s thought, “humiliation injuries” made after death. It’s recorded that Richard’s body was stripped and thrown over the back of a horse, with which these would be consistent. It’s hard to imagine how any other body could have borne such savage injuries, though I didn’t hear any mention of the arrowhead which was said to have been found in the spine. 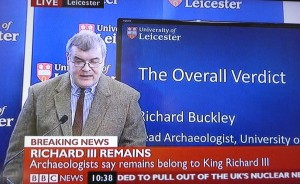 If you want to see the evidence, Channel 4 is screening “The King in the Car Park” at 9pm tonight 4 February. The remains will stay in Leicester, receiving a “lasting and dignified sanctuary” in the Cathedral. A temporary exhibition will be mounted in the Guild Hall within a few days, and a permanent exhibition will follow next year to coincide with the reinterment of the remains. The exhibition will surely look at Richard’s reputation and the part played by Shakespeare in demonising him.

But is Richard’s reputation Shakespeare’s fault? He didn’t invent the psychopathic figure of Richard III, taking much of the story from Holinshed’s chronicles, a piece of propaganda published at least partly to justify the rule of the Tudor dynasty. 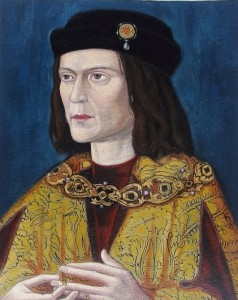 Here is Holinshed’s description:
“He was little of stature, evil featured of limbs, crook backed, the left shoulder much higher than the right, hard favoured of visage, such as in estates is called a warlike visage, and among common persons a crabbed face. He was malicious, wrathful and envious… He was close and secret, a deep dissembler, lowly of countenance, arrogant of heart, outwardly familiar where he inwardly hated, not letting to kiss whom he thought to kill, despiteous and cruel, not always for evil will, but more often for ambition and to serve his purposes, friend and foe were all indifferent, where his advantage grew, he spared no man’s death whose life withstood his purpose.”

Who could blame Shakespeare for taking this sketch and turning him into a full-blooded villain? Shakespeare did his job brilliantly. Richard is both attractive and devilish, energetically running rings round everybody else. As an audience, we’re all so entertained by him that it’s only late on in the play that we acknowledge he has to be stopped. On the night before he dies Richard is haunted by the ghosts of his victims. Shakespeare gives him a wonderful speech:
My conscience hath a thousand several tongues,
And every tongue brings in a several tale,
And every tale condemns me for a villain…..
I shall despair. There is no creature loves me;
And if I die, no soul shall pity me:
Nay, wherefore should they, since that I myself
Find in myself no pity to myself?
Methought the souls of all that I had murder’d
Came to my tent; and every one did threat
To-morrow’s vengeance on the head of Richard.

We can’t be sorry that Shakespeare wrote his Richard, a part which has been the making of many famous actors from Burbage (the first Richard) to David Garrick, Edmund Kean, Henry Irving, Laurence Olivier, Ian McKellen and Antony Sher. 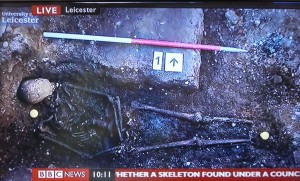 The next question begged by this is whether the skeletons found at the Tower of London and buried in Westminster Abbey as the little princes, nephews of Richard who he wanted dead so he could take the throne, might also be tested for DNA. All that is known is that they disappeared. Identifying their bones wouldn’t explain why or even if they were killed, but would confirm that they died at the Tower.

This entry was posted in Legacy, Sources and tagged archaeology, car park, Richard Buckley, Richard III, The King in the Car Park, University of Leicester. Bookmark the permalink.

2 Responses to Richard III is found!