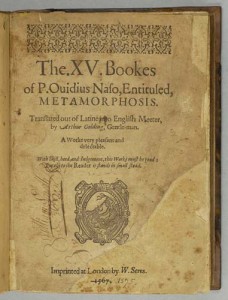 In 1598 the writer Francis Meres wrote that “the witty soul of Ovid lives in mellifluous and honey-tongued Shakespeare”. And well he might: Shakespeare had already written his own version of one of Ovid’s tales, as well as borrowing stories and referring to them, many times within other work.

It was the Roman poet Ovid’s Metamorphoses in particular that sparked Shakespeare’s imagination, a book which he would have read in the original Latin at school, which also became available translated into English by Arthur Golding in 1567. This English edition explains the aim of the book:
Of shapes transformed to bodies strange, I purpose to entreat,
Ye gods vouchsafe (for you are they wrought this wondrous feat)
To further this mine enterprise.

Ovid’s stories tell of magical transformations often involving the classical gods and their relations with humans. One of Shakespeare’s earliest debts is his most obvious, a direct reinterpretation of the story of Venus and Adonis, in which the goddess of love pursues a beautiful but unwilling youth who is gored to death by a boar.

In an early play, Titus Andronicus, Shakespeare uses Ovid’s story of Philomel, the ravished girl who is transformed into the bird with the most beautiful of songs, the nightingale. In the play Lavinia is ravished, her attackers removing both her hands and her tongue. So strong is Ovid’s influence that in this play a copy of Metamorphosis is brought on the stage and Lavinia is able to show her uncle what happened to her by finding the story of Philomel in the book.

The story of Pyramus and Thisbe is staged for royal entertainment in A Midsummer Night’s Dream, but the mechanicals’ play doesn’t get as far as explaining that in Ovid’s story as a result of the tragedy mulberry fruit are stained the colour of the blood on Thisbe’s veil. 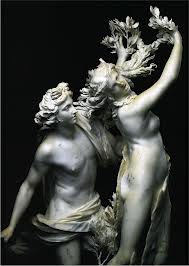 Bernini’s statue of Apollo and Daphne

Shakespeare’s borrowings are seen elsewhere, for example again in A Midsummer Night’s Dream where Helena chases her love Demetrius through the forest, and refers to Apollo’s chasing of the nymph Daphne.
Run when you will, the story shall be changed:
Apollo flies, and Daphne holds the chase;

Shakespeare expected many of his audience to understand the reference, in which Daphne appeals to the gods to preserve her virtue, resulting in her being turned into a tree. This unstageable moment has been brilliantly sculpted by Bernini, showing the moment when her skin becomes bark, her hair leaves, and her arms branches.

There are many other examples of Shakespeare’s use of Ovid, but in The Winter’s Tale, written towards the end of his career, Shakespeare combined different stories. to move towards the conclusion of the play. “A sad tale’s best for winter” they say, and Leontes’ jealousy is no more explained than the idea in Hans Christian Andersen’s story The Snow Queen where a splinter of glass enters and settles on the boy’s heart, only to be melted by the love of his friend. Winter comes to stay in Leontes’ court, as the Oracle predicts, until his lost daughter is found.

In Bohemia, sixteen years later, Perdita appears at the summer sheep-shearing festival, bedecked in flowers as the goddess Prosperpina is, her basket containing  purple violets. She is above all the goddess of the springtime, of flowers and fertility. Perdita herself appeals to the goddess:
O Proserpina,
For the flowers now, that frighted thou let’st fall
From Dis’s waggon!

At the climax of the play Shakespeare does what seems impossible: he stages one of Ovid’s Metamorphoses. Though it’s never named,the story is that of Pygmalion, known much better to us through the musical My Fair Lady. Pygmalion, a sculptor, creates his perfect woman out of marble, and falls in love with her. Pygmalion wants her to be real so desperately that the gods grant him his wish, and she is brought to life. 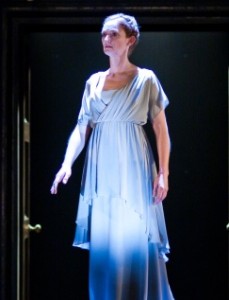 The apparent coming to life of the statue of Hermione is the most miraculous moment in all of Shakespeare’s plays. The finding of Perdita, “that which is lost”, brings life to both her parents, as spring follows winter. It’s a reversal of Ovid’s usual turning of an animate into an inanimate object, and Ovid’s story is more about art outdoing nature than reincarnation but Paulina reminds us “It is required you do awake your faith”. Jonathan Bate, in his book Shakespeare and Ovid, suggests that both men knew that ” representations of myth, metamorphosis, and sexuality can still work the traditional magic of poetry by moving us – to tears, to laughter, and to thought – and by awakening our wonder”.

4 Responses to Shakespeare and Ovid’s Metamorphoses