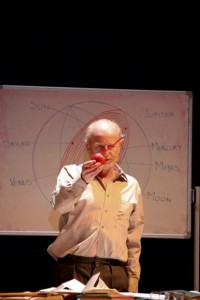 Ian McDiarmid as Galileo in the RSC’s production. Photograph by Ellie Kurttz

The RSC are currently staging Bertolt Brecht’s play A Life of Galileo in a new translation by Mark Ravenhill. To accompany this play they have put on two events about Shakespeare and Science under the title ShakesSphere. The second of these examined the links between Galileo and his theories, Shakespeare, modern astronomy, Brecht and censorship. An excellent article was published in the Guardian on the subject.

Galileo was an exact contemporary of Shakespeare, though Galileo lived until 1642. The theory that the world did not revolve around the earth had been suggested by Copernicus around a century before, but because Copernicus stopped short of declaring the theory to be true he avoided controversy. It was the military invention of the telescope in 1609 that allowed Galileo to see much more of the universe than any of his predecessors had been able to do, and to confirm the truth of the Copernican theory. He was able to see, for instance, that Jupiter was a disc with moons going round it, that Venus had phases like the moon showing it went round the sun, and that the moon was not a perfect sphere. With this evidence it became  more difficult to argue that all the celestial bodies revolved around the earth perfectly. Galileo clashed with the Catholic church, being forced to recant his beliefs. 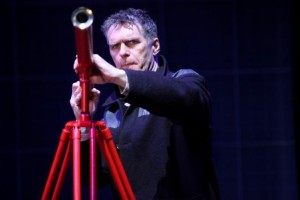 Paul Hamilton in the RSC’s current production of A Life of Galileo. Photo by Ellie Kurttz

Shakespeare never had the opportunity to see through a telescope, and to know anything like as much as we do about how the solar system and the universe works, but the astronomer Dr Marek Kukula pointed out that Shakespeare would have been far more familiar than we are with the night sky. Everybody would have known what phase the moon was in: on it depended the ability to travel after dark, and the monthly phases allowed people to measure time. The North star, the one point in the night sky that doesn’t move, is referred to by Shakespeare in the play Julius Caesar. Caesar likens himself to it:
But I am constant as the northern star,
Of whose true-fix’d and resting quality
There is no fellow in the firmament.
The skies are painted with unnumber’d sparks,
They are all fire and every one doth shine,
But there’s but one in all doth hold his place.

Shakespeare refers to the beauty of the milky way in The Merchant of Venice:
Look how the floor of heaven
Is thick inlaid with patines of bright gold.

Although we now understand much more about astronomy, Dr Kakula reminded us that uncontrollable natural events still happen: the meteor that recently landed in Russia injured over 1000 people. He showed a painting by Durer of a meteor which impressed him so much he so wanted to fix in his mind, painting it on the reverse of another picture. His painting is almost identical to photos of the Russian event. And Shakespeare likens the downfall of Richard II to the fall of a star:
I see thy glory like a shooting star
Fall to the base earth from the firmament.

Although he was no scientist himself it’s clear that Shakespeare was aware of the debate about how the universe worked, sometimes playing off the conventional view of the stars against modern theory as a way of emphasising doubt and uncertainty within the argument of a speech. And it’s this sense of doubt, of new thinking, of everything shifting, that perhaps links these two men who never met and may well have never heard of each other. Mark Ravenhill’s translation of Brecht’s play repeats several times the idea that “the earth is on the move”, beginning with these lines: 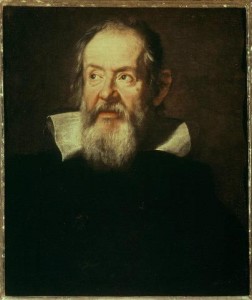 The play ends with Galileo’s follower smuggling his work out of Italy to Amsterdam where it would be printed. Shakespeare too lived in a world were censorship was common, though Shakespeare found ways of working with the system. One of Brecht’s points is that you can’t halt progress in science, or the creativity of the arts, by using the blunt tool of censorship.

3 Responses to Shakespeare, Brecht and Galileo