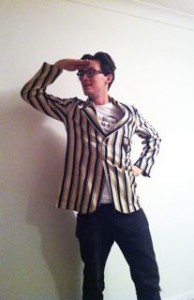 Last year on 6 March, the anniversary of the fire that destroyed the first Shakespeare Memorial Theatre I wrote a piece about the events of the day. Most people who were living in the town at the time remembered it vividly, and over the years I’ve heard several accounts.

Fire engines from miles around made their way to Stratford, but I hadn’t realised that people from outside the town had also come to watch, though photographs of the fire certainly show hundreds of people standing around the building as it burned. I’m grateful to Bronwyn Robertson, who for many years ran the RSC studio theatre The Other Place, for sending me the story about her father, John Charles Robertson and the fire: 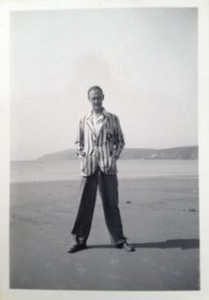 My father and friends jumped in a car and raced over to Stratford from Coventry when they heard the theatre was on fire. He was wearing his striped blazer from Coventry Cricket Club (where he was a member) and it had a hole from one of the embers that blew across the river. Only last year I passed on the blazer to my son Monroe who’s taken it back to NYC where he now lives.

This jacket has become a family heirloom, and Bronwyn comments that it was a family tradition for her father to wear the jacket on their family holidays to the seaside, as shown in the photograph. 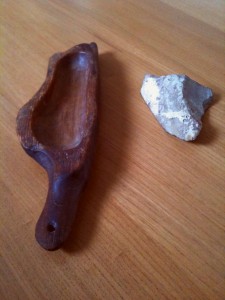 The other keepsakes of the fire I have been shown are relics of the building itself. After the fire the ruins became a sort of tourist attraction in their own right. Apparently a local resident made her way down to the theatre and picked up a charred piece of wood and a piece of the stone, both of which were lying around. From the wood a rough bowl has been carved, and these have now found their way to Shakespeare-fan Bryan Palin.

Some wonderful photographs were taken of people standing on the curved wall of the auditorium, with no apparent regard for safety. The the statue of Lady Macbeth from the Gower Memorial, then just outside the theatre, was visible through a gap where once there had been a window. Appropriately she is shown wringing her hands in despair. 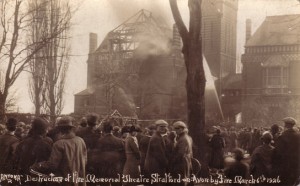 The Picture House in Greenhill Street was converted into a temporary theatre within a few weeks, and plans for a new theatre were created almost immediately. In spite of local affection for the building, the fire was seen by some as a blessing in disguise. Archibald Flower claimed that there had been so much discontent with the old theatre that discussions had already taken place amongst the governors with a view to building a new theatre. George Bernard Shaw was so opposed to the old theatre that he sent a telegram of congratulations to the Governors after the fire.

It was not a foregone conclusion that the theatre would stand where it does, connected to the old building. Other sites were considered, especially The Paddock off Southern Lane which had been the venue for the 1864 Pavilion. This had the financial advantage of being visible only from two sides, not all the way round as with the riverside site. But it was eventually decided that the site by the river was so imposing it could not be ignored.  It’s interesting to think how much difference this change of venue would have made, particularly to the older, quieter end of the town.

2 Responses to Relics of the Shakespeare Memorial Theatre’s fire