Shakespeare at New Place: making the house a home 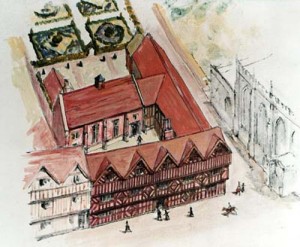 An artist’s impression of New Place

You can tell a lot, can’t you, about people from the inside of their houses, and what they choose to put there?  The TV programme Through the Keyhole is jokily based on the idea that it’s possible to deduce the identity of a person by looking at their home.

Knowing something about Shakespeare’s home might just help us to understand his work and what sort of man he really was. At this month’s meeting of the Stratford Shakespeare Club Dr Tara Hamling spoke about “Shakespeare at Home”. How did he choose to decorate his grand house, New Place, after he had bought it in 1597? It had a chequered history: originally built in the 1480s by Sir Hugh Clopton, it was already an old building. He might have made quite radical changes himself: Shakespeare sold the Stratford corporation a load of stone, thought to be left over from his building work. Then his house was substantially changed around 1700, perhaps being almost totally rebuilt, and it was this house that was demolished by the most unpopular man ever to have lived in Stratford, the Reverend Francis Gastrell, in 1759. 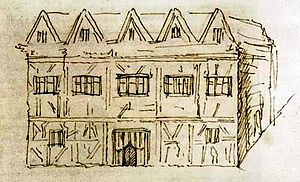 Tara Hamling then, has to speculate about what Shakespeare’s home was like. All that actually remains is a blank space with the remains of some foundations below ground level. To help give an idea of what it might have looked like the EyeShakespeare app is about to be upgraded to include a 3D simulation. The only record of the house that Shakespeare knew is the little sketch you see here, made from memory by George Vertue many years later in 1737. It would be entirely consistent with the period for Shakespeare to have done Clopton’s house up. Late Elizabethan England saw an unprecedented building boom, with old buildings being remodelled and new ones springing up. In Stratford two major fires forced the rebuilding of houses in the 1590s:  many of the new houses that were put up to replace the old ones still stand, impressive three-storey townhouses. 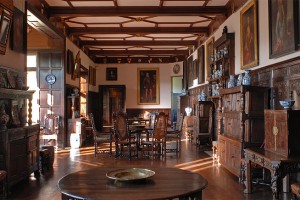 The interior of Hutton in the Forest, dating back to the 1630s

What, though, might the house have looked like inside? Around the time he bought New Place he also acquired a coat of arms for the Shakespeare family, and it’s pretty certain that he would have found a way of incorporating it in his house, maybe placing it above the fireplace, as it confirmed his rising social status. We know from his will that he owned one object of considerable craftsmanship, a silver-gilt bowl left to his younger daughter Judith, but there is no information about what else he might have owned. Tara Hamling produced images of several existing houses of the same period and the same approximate size: they featured decorative plaster ceilings, carved staircases, wall hangings, and lofty halls with large, beautiful windows. There is some evidence that houses in Stratford were so decorated: there is still a shop in Wood Street with an elaborate plaster ceiling. A questioner mentioned the local tradition that the carved wooden staircase now in the Dower House in Stratfordwas originally in New Place, and Hamling agreed this was quite possible as valuable materials were routinely recycled.

She commented that art historians have concentrated on great art such as was to be seen at court or in stately houses, but suggested that the “middling group” were prosperous enough to aspire to own artworks of their own. Edward Alleyn, another actor who made his fortune, was known to have purchased portraits of royalty and of religious subjects. And wall paintings showing the Old Testament story of Tobias and the Angel still decorate what is now the White Swan Hotel. 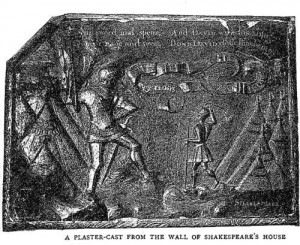 The Samson and Goliath panel, an early photograph

Hamling concluded by talking about an item which she has only recently discovered, a plaster panel at one time in Shakespeare’s Birthplace. It shows the Old Testament story of David and Goliath. The piece is dated 1606 and may have been added to the room when Lewis Hiccox rented the property as the Maidenhead Inn. This makes it the only decorative piece we can be sure was in a property owned by Shakespeare during his lifetime, even if he didn’t live there. It was first recorded in 1795, and was removed by Mrs Hornby who stripped the house of everything that could be moved when she quit the property in 1820. It was auctioned off in 1896. The buyer’s name is not recorded, but as it sold for the substantial sum of £25 it’s likely that it was put in a prominent place in someone’s house. Somebody must know where it is! The full details are in Tara Hamling’s blog and if you would like to go through the keyhole to see what people’s houses were really like she and Catherine Richardson are organising a conference to be held in London between 17-19 April 2013, entitled Materialities of Urban life in Early Modern London.