Shakespeare in cartoons: the story of Bruce Bairnsfather 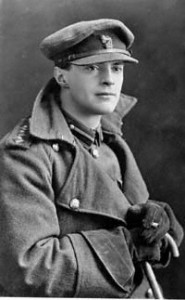 I’m always surprised to find how many links there are between Stratford, Shakespeare and other creative people. Recently I heard from Mark Warby who has provided me with the following information about one of these, the famous First World War cartoonist Bruce Bairnsfather.

Bairnsfather’s family came to Stratford-upon-Avon in 1904 when he was sixteen, moving into the Old Spa House in Bishopton. Bruce was educated at the Army School in Stratford (Trinity College), with a brief spell in the army before going to art school in London. He gained employment as an electrical engineer with Spensers Limited in Stratford, working on the installation of electrical light in the old Memorial Theatre, where he also worked the new switchboard for one of the Festivals. He later wrote about his experiences controlling the lighting for the Benson Company in his autobiography, Wide Canvas.

On the outbreak of the First World War Bruce Bairnsfather rejoined the Royal Warwickshire and went to France with the 1st Battalion in November 1914. It was in the winter of 1914-15, in trenches near Plugstreet Wood, that he first began to make comic sketches of life at the Front, which proved extremely popular with his fellow combatants in the trenches. In March 1915 he sent one of his drawings off to The Bystander magazine in London. The cartoon, captioned “Where did that one go to?” was published in the magazine on 31 March 1915.

Bruce served at the Front until being wounded during the Second Battle of Ypres on 25 April 1915, after which he was sent home to convalesce. He was approached by The Bystander for more drawings, and his Fragments from France soon began appearing regularly in the magazine, and were incredibly popular with the men fighting at the Front and their families back home. Almost overnight Bruce Bairnsfather became a household name and was soon one of the most famous cartoonists in the world. Eight collections of his Fragments from France cartoons were published, selling over a million copies. The Bystander also produced a whole range of Bairnsfather merchandise featuring his cartoons including postcards, jigsaws, colour prints, playing cards, calendars and other items. 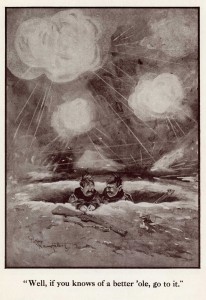 Bruce Bairnsfather’s popularity during the war years was immense. From 1916 he was attached to the War Office Intelligence Department as an ‘Officer Cartoonist’ and in this capacity toured the French, Italian and American fronts, at the request of the Allied armies.

Bairnsfather’s most famous cartoon is one of these Fragments from France, “Well if you knows of a better ‘ole, go to it” – published on 24 November 1915. Showing two soldiers on the battlefield sheltering in the same shell-hole, the sentiment is never out of date and the image and its catch-phrase is still being borrowed today.  The cartoon was created at the family home in Bishopton. 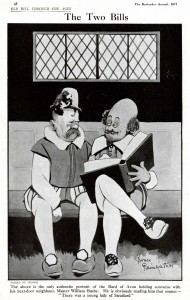 In 1917 Bruce wrote a play The Better ‘Ole, constructing a model theatre at Bishopton to help with designing the sets and working out the story. Also in 1917 he created a special set of cartoons on the theme “Old Bill Through the Ages”. His Old Bill character was depicted in various historical events, in this one being pictured as a neighbour of William Shakespeare in Stratford-upon-Avon. It’s fair to assume he got the inspiration for this one from living on the outskirts of the town.

A film of “Old Bill Through the Ages” was made in 1924 based on these cartoons, and Bairnsfather, always keen on acting, appeared briefly in the film himself. Mark Warby describes the film:

Old Bill was played by Syd Walker. The film features a scene in which William Shakespeare appears, played by an actor named Austin Leigh. In the scene, Old Bill is shown as a courtier who is sent to Stratford to fetch Shakespeare, who he finds dictating a sonnet to a room full of typists. Shakespeare shows Old Bill his complete works, some of which are deemed unsuitable for the royal eyes, and Shakespeare, Anne Hathaway and Old Bill travel to court. There Shakespeare gives selected readings from the plays, gradually sending the court to sleep!

Bairnsfather’s family lived in Bishopton until 1921, and in 2005 a plaque commemorating him was unveiled at Victoria Spa Lodge by cartoonist Bill Tidy, MBE, and there is a website dedicated to the cartoonist. www.brucebairnsfather.org.uk . Mark Warby is hoping to mount an exhibition in Stratford-upon-Avon of Bairnsfather’s work, concentrating on his local connections, to coincide with the start of the First World War in 2014. If you have any ideas for potential venues, he would love to hear from you!