Souvenirs of Shakespeare: “I’ll have his picture” 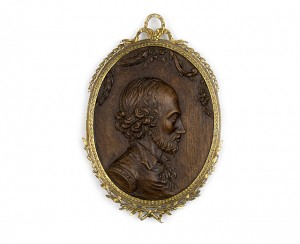 Whenever we visit an unusual place or special event, we buy a souvenir. We may want to show off to our friends, or just to have something to remind us of the occasion.

The first proper Shakespeare souvenirs were the mulberry wood relics created by Thomas Sharp in the late 1700s from the wood of Shakespeare’s mulberry tree. This had been growing in New Place Gardenbefore being unceremoniously cut down by the Reverend Francis Gastrell who was tired of people asking to see it. Instead of burning the wood, he sold it to Sharp who saw a business opportunity.

When David Garrick was presented with the freedom of the borough in 1769 at the time of his Stratford Jubilee, it was delivered in a casket made of the wood, and during the Jubilee he wore the medallion now in the collections of the Shakespeare Birthplace Trust. This was fantastic publicity for the wood, and Sharp began to made all kinds of mementoes, often called relics, from it: so many that it was commented on that it must have been a very large tree. 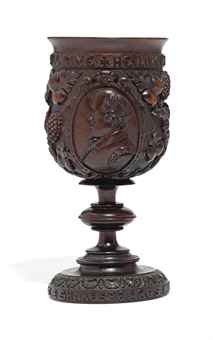 Objects containing a portrait of Shakespeare have always been particularly prized, and as late as 1864, for the tercentenary celebrations, they were still being produced. This handsome mulberry-wood goblet was made for the tercentenary, still, apparently, from the original tree, and was sold at auction in 2012 for £4750, greatly exceeding its estimate. By 1864 Shakespeare was well and truly established as the national hero and many high-quality souvenirs were being produced as well as cheaper ones.

I’m indebted to Bryan Palin for showing me a jug and platter which he owns, made in 1864 for the magnificent Tercentenary celebrations. A portrait of Shakespeare is positioned at the front of the jug. 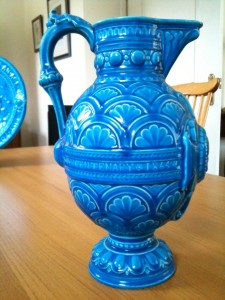 It would seem that quite a number were made, and in a variety of different colours. Casting around, I found a similar jug and platter for sale on Ebay, more elaborately coloured. Made by the renowned company Minton these would always have been expensive and are some of the most impressive Shakespeare souvenirs I’ve seen.

Most people would have had to settle for something a little cheaper: an engraving perhaps, or a metal medallion. By 1864 gone were the days when visitors to the Birthplace could remove a bit of wood off “Shakespeare’s Chair” as a souvenir. Like the Mulberry tree, there seems to have been an inexhaustible supply as long as there were people to buy them, but these spurious relics were by then frowned on. 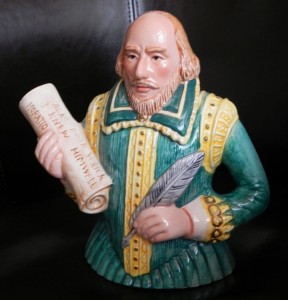 Nowadays Shakespeare is everywhere: on mugs, tea towels, and key rings. A few years ago I spotted this mass-produced modern tea pot on Ebay and couldn’t resist it. It shows Shakespeare holding a quill in one hand (the handle) and a scroll with a quotation from Hamlet in the other (the spout). His head, naturally, is the lid. The sticky label underneath tells me that it is not to be used as a teapot, but I suppose we rarely buy a souvenir for its practicality. It is part of the charm of the pot that the line inscribed “Alas poor Yorick, I knew him well Horatio”, is a misquotation. I somehow doubt it will ever be worth anything, but it always makes me smile.

One Response to Souvenirs of Shakespeare: “I’ll have his picture”