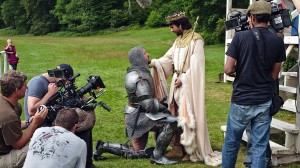 Whenever an actor best known for film or TV work is cast to perform in Shakespeare there’s always a debate about whether celebrity casting is a good or a bad thing. Should, in particular, theatres, employ celebrities in an obvious attempt to boost audience numbers, or should they stick to trying to build the careers of more serious but less glamorous stars. It’s a tricky argument which has swung both ways. James McAvoy’s Macbeth is a case in point: I haven’t seen it, but it’s a valid production and McAvoy is a good actor as well as a good-looking one. At the time of David Tennant’s performance of Hamlet Jonathan Miller suggested he had only been given the role because he was currently playing Dr Who on TV, whereas he had been playing increasingly important Shakespeare roles at the RSC since 1996. And Tennant, as anyone who saw his Hamlet will remember, has the rare gift of being able to command a stage to give a memorable performance as well as handling the complexities of Shakespeare’s verse. 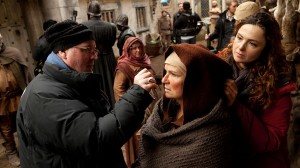 It’s perhaps less of an issue with Shakespeare on TV. Using well-known TV actors broadens their range and the programmes pick up a wide range of viewers from Shakespeare-lovers to those who are turning on just to see their favourite actors.  And so it was last year with The Hollow Crown. The decision was made to lead each of the four plays with young actors with a substantial TV and film fanbase, Ben Whishaw and Tom Hiddleston. They were surrounded by other fine actors who are also well known to TV audiences: David Suchet, Patrick Stewart, Julie Walters, Jeremy Irons. On Twitter it was interesting to see how many people tuning in for the stars were surprised to find actors such as David Suchet, universally known for his portrayal of the Belgian detective Hercule Poirot, obviously at home in Shakespeare. Many older theatregoers will remember all of the above performed on stage, often in Shakespeare, before they were famous. 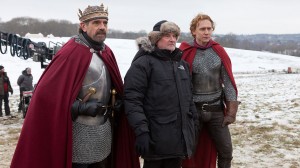 It’s actually the same for Messrs Whishaw and Hiddleston. Ben Whishaw made his name playing Hamlet in 2004, and Hiddleston was tipped for stardom while performing in Cheek by Jowl’s production of Cymbeline in 2007. Most actors work in a variety of media, though Simon Russell Beale who played Falstaff in The Hollow Crown is still the darling of theatregoers.

The Hollow Crown did not please everybody: heavily cut, sometimes eccentrically shot, but it’s been extraordinarily successful in bringing Shakespeare’s history plays to a popular audience. I take an interest in how Shakespeare is represented in social media such as Twitter and Facebook, and have been intrigued by the activities of the Twitter fan group for the series @HollowCrownFans , sharing news, information, comments, clips and a refreshing enthusiasm. Sundays are #ShakespeareSunday when followers can post quotations from Shakespeare, sometimes themed. I’ve been finding these really interesting: instead of concentrating solely on the series, quotations from plays throughout the canon, often quite obscure, are posted. Clips from other recordings of Shakespeare’s plays, such as Laurence Olivier’s Henry V, appear. Clearly many are fans of Tom Hiddleston, but at least some of them are also getting the Shakespeare and finding it says something to them. And since when has the actor playing Henry V not been the pin-up of at least part of the audience?

It can’t be a bad thing for people previously unaware of Shakespeare’s work to be watching it, and if the BBC’s aim went beyond ratings to try to encourage an interest in Shakespeare among young people I’d say they’ve succeeded.

But there’s more! @HollowCrownFans are encouraged to join a writing challenge, closing on Easter Monday, and being judged by The Shakespeare Institute in Stratford, no less. 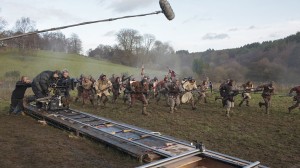 The excitement has been fuelled by the release last autumn of the DVD set of the series, as yet only available for Region 1 machines. The series is to be shown on PBS in the USA, a Region 2 release to follow: some enthusiasts have been so keen they have bought a region 1 machine so they can watch it ahead of the release.

The Hollow Crown has been good news for Shakespeare on TV and it’s great to report that its success has been recognised by scooping some awards: Richard II won the Royal Television Society’s award for Best Single Drama in 2012,  and the Times Breakthrough Award at the South Bank Sky Arts Award ceremony was won by Tom Hiddleston. I highly recommend Tim Minchin’s witty presentation speech and Hiddleston’s acceptance on this clip.

And the series has been nominated in three categories for the BAFTA TV awards due to be announced on 28 April.

7 Responses to The Hollow Crown: popularising Shakespeare on TV