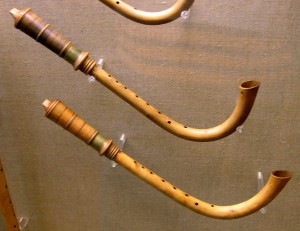 Shakespeare’s use of music is always a popular subject, but just now it seems to be everywhere.

Shakespeare’s Globe is hosting a conference on Shakespeare, music and performance from 3-5 May, which will include input from major academics as well as performances of a selection of music.

The Shakespeare Birthplace Trust has just launched an online exhibition on the subject of Shakespeare and Music, including sound and video clips, images from the library, archive and museum collections, and a series of blog articles looking at the subject from different angles.

And this week the retired RSC musician Ted Watson talked to Stratford’s Shakespeare Club about his years of experience of providing music to accompany the Company’s productions. He arrived in 1966 with a nine-month contract and left forty-two years later.

As well as being a musician in the theatre Watson has a considerable career as a composer, teacher and performer. 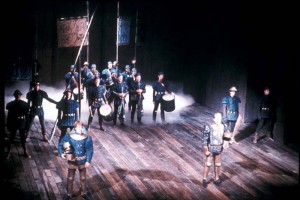 I would guess he’s also something of a frustrated actor since his talk included a bit of dressing up and he acknowledged that he always enjoyed having to get into costume to appear on stage. And no wonder. Playing in the band box of the Royal Shakespeare Theatre must have been a rather disjointed experience for the musicians, being as they were so far from the stage that they could neither see nor hear what was going on.

Shakespeare was always very aware of the importance of music on stage. Dances are usually celebratory, songs can be merry or sad, fanfares mark entrances, but music also provides atmosphere, a sense of wonder, enchantment, threat or fear.

The Merchant of Venice provides several opportunities for atmospheric music, such as the night scene when Jessica and Lorenzo sit outside while music plays:
How sweet the moonlight sleeps upon this bank!
Here will we sit and let the sounds of music
Creep in our ears.

“I am never merry when I hear sweet music” says Jessica. “The reason is, your spirits are attentive” replies Lorenzo. The gentle mood, leading up to Portia’s return to her home, is created by the combination of music and poetry.

Earlier in the play Bassanio chooses from the caskets to the accompaniment of a song, and Portia makes the connection between music and atmosphere.
Let music sound while he doth make his choice;
Then, if he lose, he makes a swan-like end,
Fading in music: that the comparison
May stand more proper, my eye shall be the stream
And watery death-bed for him. He may win;
And what is music then? Then music is
Even as the flourish when true subjects bow
To a new-crowned monarch: such it is
As are those dulcet sounds in break of day
That creep into the dreaming bridegroom’s ear,
And summon him to marriage.

Elsewhere the physician Cerimon, in Pericles, calls for the “rough and woeful music” of the viol to help revive Thaisa, and most magically in The Winter’s Tale Paulina signals that the statue should come to life with the words:
Music, awake her; strike!
‘Tis time; descend; be stone no more; approach;
Strike all that look upon with marvel. Come!

Ted Watson played a recording of the music for this moment in the 1992 production of The Winter’s Tale, composed by Shaun Davey. It’s a beautiful piece of music in its own right that complemented what was happening on stage perfectly.

Watson also looked at recordings of the same song, Where the bee sucks, from The Tempest, to show the variety of responses different composers have made. He played an authentically Jacobean version written by Robert Johnson, Guy Woolfenden’s 1978 version, and one written by himself. Robert Johnson composed the original music for Shakespeare’s play, and may have performed at other plays by the King’s Men. As well as working with Shakespeare he was lutenist to both James I and Charles 1 until 1633. 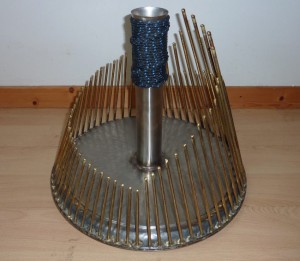 With musicians at the RSC so often being invisible it was particularly rewarding to see and hear Ted demonstrating some of the instruments he’s played from penny whistle, clarinets and saxophones to the crumhorn and the weird waterphone. This strange instrument was much used for Michael Boyd’s History cycle every time a sense of dread and foreboding was needed. You can see and hear one being performed here.

RSC musicians have been required to play in a huge range of styles as well as instruments from original Elizabethan, folk, jazz and classical, and Adrian Lee’s music for The Island Princess required the musicians to turn themselves into a south-east Asian gamelan orchestra.

Watson closed his talk by playing a recording of the song The Warwickshire Lad, words by David Garrick, music by Dibdin, written for the 1769 Garrick Jubilee in Stratford. It was good to be reminded that composers have also celebrated Shakespeare’s love of music by writing in his praise.