Marie Corelli, the Avon and her Venetian gondola 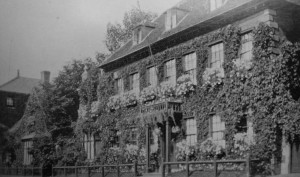 On Saturday, 27 April Mason’s Croft, now the Shakespeare Institute, is celebrating the life of another of Stratford-upon-Avon’s writers, Marie Corelli. The event is part of Stratford’s Literary Festival, and Mason’s Croft was the Victorian novelist’s home from 1901 to her death in 1924. She came to live in Stratford for its old-world charm and connections with Shakespeare, who she idolised. 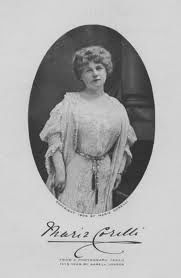 Marie Corelli as she liked to be seen

She’s a writer who is now almost forgotten, but her romantic novels made her extremely famous. Her first novel, The Romance of Two Worlds, was published in 1886, and in all she wrote around thirty books, half of which were world best-sellers. It was not unusual for a first edition of up to 50,000 copies to sell out in one day. Later in her career she also became a powerful public speaker. You can find out more about what made her so popular by coming along to the afternoon of events at Mason’s Croft, which include a performance and talks about her conservation work by Dr Robert Bearman and about her literary achievements by Nickianne Moody.

As part of the day, it will be possible to go for a ride around the town in a horse-drawn carriage. Marie’s own little carriage was drawn by two Shetland ponies called Puck and Ariel, named after characters from Shakespeare’s plays. Even better, you can try out Marie Corelli’s own gondola. 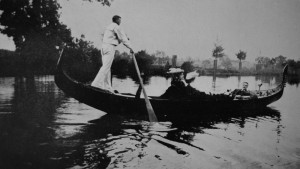 Marie Corelli in her gondola on the Avon

She liked to fancy that she was of Italian lineage (with little evidence) importing her own gondola and gondolier from Venice. After her death the gondola was purchased by a film company and made several movie appearances. In more recent years it has been restored and occasionally puts in an appearance, as this weekend, on the Avon.

Her interventions in local events became legendary. I’ve recently been shown some transcripts of letters from Marie Corelli to the Captain of Stratford’s Boat Club, which document her award of a silver trophy cup, called The King’s Trophy, in 1901. This was designed to celebrate the accession of King Edward VII. I’m indebted to Mr Bill Collins, a long-term member of the Boat Club who almost by chance was shown the original letters and has both transcribed them and provided a commentary. She originally made her offer of the valuable cup in April, with no strings attached, but not long before the race she threatened to withdraw the Cup because the “proper observances” had not been made, by which it seems she meant that sufficient publicity had not been given to her generosity.

Differences were overcome, and the cup was successfully awarded, but according to Mr Collins, “When she offered another trophy the following year to celebrate Edward VII’s coronation, her offer was not mentioned at the AGM, and she withdrew it, publicly, the next day. During the summer of 1902 Marie and the Boat Club made their respective cases in the letters column of the Stratford Herald, with Marie coming off the better. Having had to deal with her autocratic ways, perhaps the committee wished to limit her influence on the club. She and the boat club were later reconciled: the watched the regattas from her famous gondola, and presented the prizes in 1912.” 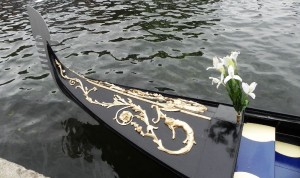 Although the cup was intended to be awarded only once, from 1905 onwards it became the trophy awarded annually for the main event, the Senior Coxed Fours, and it remains one of the Challenge Trophies at Stratford Regatta to this day.

The River Avon, particularly the stretch between Clopton Bridge and the site of Lucy’s Mill just below Holy Trinity Church, is always associated with Shakespeare, the Sweet Swan of Avon. Marie Corelli’s gondola is a charmingly eccentric reminder of the connection between them and the later history of the town itself.