Othello, Iago and the search for character 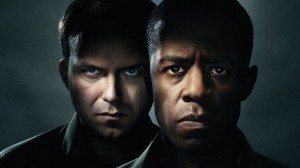 The National Theatre’s new production of Othello is beginning its previews this week. Starring Adrian Lester as Othello, the Henry V from a few years ago, and Rory Kinnear as Iago, who has recently played Hamlet, both at the National, it promises to be a terrific production.

During his successful period in charge, Nicholas Hytner has overseen a number of Shakespeares, and he has just written a piece about acting in which he talks about the challenges offered by Shakespeare. Being an actor himself, the author was able to leave questions unanswered, making the actors in his company find their own answer. What, for instance, was Hamlet’s relationship to Ophelia? There are as many answers as there are actors to take the roles.

For Hytner the plays are always incomplete until inhabited by actors.
The desire of literary critics over four centuries to solve Iago as if he were a puzzle seems to me to be missing the point. The solution is the actor. The playwright writes from the premise that the dots can’t be joined on the page, and writes with the confidence of an actor who knows that, if they are any good, his colleagues will do the rest of the job for him.

Michael Attenborough made much the same point when talking to the Shakespeare Club in December about rehearsing Shakespeare. Each actor has to ask themselves why they have been given these words, at this moment: how they connect with his character.

One of the actors Hytner quotes, and an actor who has previously played Iago, is Simon Russell Beale, an actor skilled in joining up the dots provided by Shakespeare. Within the last year Beale has taken one of the most difficult of roles, Timon of Athens, an incomplete role if ever there was one, and in January 2014 he will play King Lear at the National Theatre, directed, as was his Iago, by Sam Mendes. As it happens, as part of the Shakespeare Birthday celebrations in Stratford this week Beale is being awarded the Pragnell Prize which recognises outstanding contributions to Shakespeare. 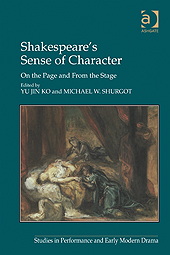 I’ve recently been reading a new book, Shakespeare’s Sense of Character: On the Page and From the Stage, edited by Yu Jin Ko and Michael W Shurgot. It’s a collection of essays that look at the subject of character, for many years a dirty word in the academic world though not in the theatre. It’s significant, I think, that out of fourteen chapters three are about Iago in Othello.

The first is written by Dan Donohue, whose portrayal of Iago at the Oregon Shakespeare Festival in 2008 was highly praised. His analysis of the process is fascinating. Iago is one of the most difficult roles written by Shakespeare, and is a superb actor himself. As  Donohue puts it:  “For me, the opportunity to play that role would be like studying acting from a master tacher. It would be an opportunity to literally step into Iago’s shoes and to follow in his footsteps. My challenge would be to be as honest in representing Iago as “Honest Iago” appears to the other characters in the play.” 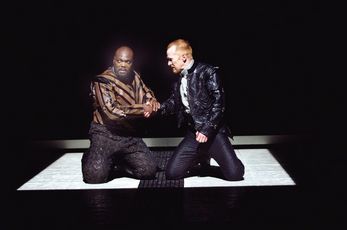 He examined every phrase, as Hytner and Attenborough suggested:
“Iago must choose each word; he must coin each phrase; and he, himself, must be the architect of his speech. I meticulously pulled apart his text – line by line and word by word – as I asked myself questions about the choices he made in expressing himself through language”.

In the end, he found a way: “I keep in mind what Iago secretly wants, but I play the scene as if I were really trying to help the Moor. With that in mind, I would choose to play – Protect my friend, Othello, from some painful news – rather than playing – Torture the person I want to destroy“.

In his essay Michael Shurgot examines the great temptation scene, Act 3 Scene 3, concentrating on the dangerous section where Iago vividly describes Cassio’s dream. “The striking theatrical paradox of this scene [is that] the more deeply felt and convincingly performed the actor’s impersonation of Iago’s sexual longings, the more incredulous will be Othello’s failure to penetrate Iago’s mask; and the greater the risk that this segment of [the scene] will dissolve into a grotesque parody of Othello’s temptation and fall.”.

Finally Travis Curtwright examines early modern acting styles, looking at Philemon Holland’s translation of Plutarch’s essay on How to discern a flatterer from a friend. A tricky distinction, since as Plutarch points out “there is no difference between them”, at least not outwardly. Plutarch defines the flatterer as an actor: he “carrieth himself like  grave tragedian, and not as a comical and satirical player, and under that visor and habit he counterfeiteth a true friend”.

The book offers a series of different perspectives on the complex relationships, between two of Shakespeare’s most compelling characters. With two superb actors to play Othello and Iago, the production should be one of the year’s most fascinating theatrical events.