Encouraging the sense of wonder: Educating with Shakespeare 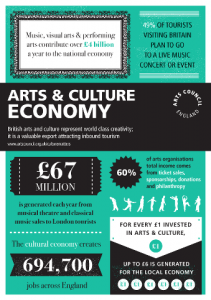 Funding and the arts is a subject that never drops off the agenda completely, but since Arts Minister Maria Miller’s speech about funding, indicating that the arts needed to think more about profit, arts organisations and their supporters have been making their voices heard more loudly.

Arts Council England have produced a couple of infographics summarising the economic benefits of the arts sector illustrating how much the arts contribute to the economy for a relatively small investment. The cost of the arts to the British citizen comes out at 14p a week each.

This week I’ve heard that the French are considering putting a 4% tax on smartphones, tablets and downloads to defend French art against the losses caused to artists by the internet. And in Germany, where the arts are already significantly better funded than in the UK, it’s been reported that a full education in arts and cultural subjects is seen as essential for children at school.

The idea that formal education is about more than measuring standard achievements in a limited range of subjects is one that Ken Robinson has tackled in one of his outstanding talks. He’s an Englishman based in California, and entitles it “How to escape education’s Death Valley”. He sees it as essential that the differing capabilities of children are recognised and their innate curiosity and creativity is encouraged. 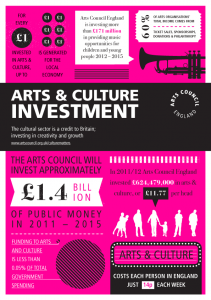 The Guardian’s Lyn Gardner recently wrote a piece to encourage more people fight for the arts. It mentioned the What’s Next movement in which leaders of arts organisations such as theatres and museums have been meeting, attempting to link up with politicians, local arts organisations, schools and colleges with the aim of helping to define and understand the value of culture. It’s “founded on the idea that everything is connected”.

There is evidence that schools putting the arts at the centre of their curriculum have raised grades, but more importantly have increased the confidence and happiness of the pupils. Lyn Gardner argues that theatre companies should be engaging with their local communities in order to increase the number of people for whom the arts are worth fighting. The My Theatre Matters campaign aims to ensure that those in power know how much voters care about the survival of their local theatres. You can join on the website. 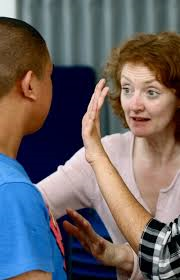 Kelly Hunter, a British actress who has spent much of her professional life in the subsidised theatre, has written a fascinating essay in the latest edition of the British Shakespeare Association’s magazine Teaching Shakespeare in which she explains how Shakespeare is being used to help autistic children in a project being undertaken at Ohio State University. It’s a great example of how the arts are being used to make a difference to people’s lives.

In another article in the same magazine Laura Nicklin, a postgraduate student, looking at why people study Shakespeare at this level, suggests that “the study of Shakespeare illuminates the human experience, human nature and human values, [and] … stimulate our empathetic abilities”.  You’ll find a link to the magazine on the Shakespeare in Education home page.

It’s always been difficult to quantify the importance of culture and the arts, but the often-repeated comment that if the arts were really valuable they would be profitable doesn’t hold water. You might say the same about sport, but few of our Olympic medal-winning athletes would have been so successful without substantial financial support. The success of The Hollow Crown, the BBC’s main contribution to the 2012 Year of Shakespeare, a series which is now being shown in the US, can be at least partly attributed to the subsidised theatre sector where many of the actors, designer and directors gained their mastery of Shakespeare. Among the older actors to whom this applies are David Suchet, Jeremy Irons and Patrick Stewart, and for the younger ones, Rory Kinnear, currently playing Iago in the National Theatre’s Othello, and Bolingbroke in The Hollow Crown’s Richard II, made his mark in the 2003 RSC season playing smallish roles in plays such as Cymbeline and The Taming of the Shrew.

Lyn Gardner’s piece quotes philanthropist Aileen Getty, who has recently made a substantial donation to London’s Circus Space. She explained her reason:” I have thought deeply about this over the years, and believe you cannot underestimate the value of keeping wonder alive. Wonder keeps our spirits joyous and resilient.” Wonder is  often invoked by Shakespeare as a reaction to events, whether it’s the miracle of the curing of the French king by Helena in All’s Well That Ends Well, the appearance of the Ghost in Hamlet or the fulfilment of the oracle in The Winter’s Tale, where  “Such a deal of wonder is broken out within this hour that ballad-makers cannot be able to express it”.