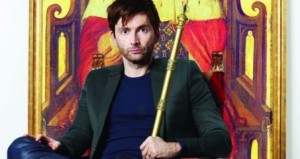 At last, at last, the Royal Shakespeare Company are launching “Live from Stratford-upon-Avon”, in which the sellout production of Richard II starring David Tennant is  to be screened live in cinemas around the world.

The RSC have been slow getting into live screenings, but the signs are that this is a well thought-through development. The RSC’s productions that have already been filmed and shown on TV, most recently the African Julius Caesar last year, rethought the stage version and there are signs that with this they will do more than just replicate the feeling of being in the theatre. It should be worth the wait.

The play’s director and the RSC’s Artistic Director Gregory Doran, quoted in the Guardian, explains:

“It’s a magnificent opportunity to share the experience of live theatre with the widest possible audience, but I think it’s very important that we find a way of re-imagining it for film; it mustn’t just be like having a security camera peering at the stage.

“I also want to find a way of capturing something of the special experience of watching Shakespeare in his own town – there is something about Shakespeare in Stratford, this is the air that he breathed.

“The film of the 1959 production of the Dream opened with Charles Laughton, who played Bottom, out in the streets of Stratford, and the camera then follows him into the theatre – where you see a very young, slim Peter Hall sitting at the back of the stalls. I like that idea of opening the theatre out into the town. Maybe this time we’ll start with David wandering around the souvenir shops buying fridge magnets.”

The production will be screened live on 13 November, and on 15 November it will be streamed to up to 1,000 schools, reaching as many as 600,000 pupils with an additional studio link-up hosted by Konnie Huq, and a live online Q&A with members of the creative team including both Doran and Tennant. The RSC’s education team will also be creating an extensive package of online classroom resources for use both before and as a follow up to the broadcast. These should ensure that schools make the most of this exciting production.

Richard II is to be the first of Doran’s complete five-year Shakespeare cycle, which will give time and space to each play rather than attempting, as happened in the 2006-7 Complete Works Festival and the 2012 Year of Shakespeare, to perform as many of the plays in as short a time as possible: good for record-breaking, but maybe less satisfying for those wanting to get to know them in depth. The plan is to film two or three plays a year, as the cycle progresses. Having more plays available on film will allow more people to be able to see them, but also give the opportunity for people to see them more than once.

Live From Stratford-upon-Avon is being masterminded by John Wyver, whose Illuminations blog I’ve referred to a number of times. He’s got extensive experience of filming Shakespeare which should ensure that these are outstanding.

I’m delighted to read Doran’s comment about the Charles Laughton introduction to A Midsummer Night’s Dream. Watching it now, it gives a real flavour of what Stratford was like at the time and how life and theatregoing has changed. Theatre productions are very much of their time, and some day people will look back at these films and will be amused to see the context in which they took place. 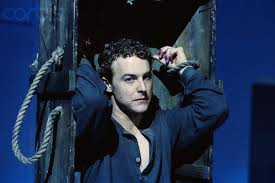 The RSC’s website includes a few photographs from past Stratford productions, showing many Richards, several of whom, like David Tennant, also played Hamlet: Michael Redgrave, Alan Howard, David Warner, currently Jonathan Slinger. And a few years ago Sam West also completed the double. Most of them, though, have played Richard II first. I’m looking forward to seeing whether, or rather I hope how, David Tennant finds a way of using his talent for communicating with the audience without undercutting the seriousness of this play. In just a few devastating scenes Richard’s brittle arrogance is shattered to reveal the vulnerable human being underneath:
For you have but mistook me all this while:
I live with bread like you, feel want,
Taste grief, need friends… 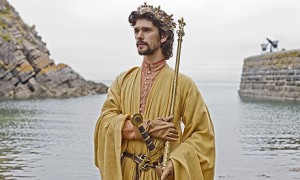 Ben Whishaw as Richard II in The Hollow Crown

Richard II has been almost ignored by film-makers but 2012’s terrific history tetralogy The Hollow Crown has brought the play, quite rightly, to new audiences whose only option for comparison has been the 1980s BBC version with Derek Jacobi.

On the subject of Shakespeare on screen, I must mention the production of Othello coming up in September, to which has recently been added the Donmar Warehouse’s production of Coriolanus (featuring The Hollow Crown’s Henry V, Tom Hiddleston), which will be screened in January 2014. Both are available through NTLive.

Also coming up in June in cinemas are three plays from the 2012 Shakespeare’s Globe season: Henry V, The Taming of the Shrew, and the acclaimed Twelfth Night.

One Response to Shakespeare, Live from Stratford-upon-Avon