Shakespeare, the BAFTAs, and screening theatre 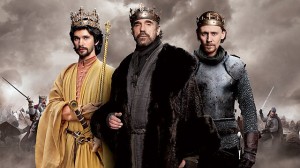 On Sunday May 12 the award ceremony for the UK’s TV industry, the BAFTAs, is being held. Shakespeare interest is focused on The Hollow Crown, the four-part mini-series which screened during the summer of 2012. The series isn’t badly represented: Ben Whishaw is nominated for best leading actor, Simon Russell Beale for best supporting actor, and Richard II as best single drama. There’s no nomination though for the series as a whole, and the Hollow Crown Fans @HollowCrownFans on Twitter, are so disappointed by this that they’ve decided in their admirably enthusiastic way to have their own, The Hollow Crown Fans awards. If you’re quick you’ll be able to vote. 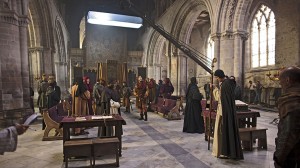 In case you’re not familiar with the series,  it consisted of four of Shakespeare’s history plays, Richard II, Henry IV parts 1 and 2, and Henry V. The adaptations featured many leading British actors well known for both their TV and stage work including Jeremy Irons, Tom Hiddleston, Ben Whishaw, Rory Kinnear, Patrick Stewart, Julie Walters, David Morrissey, David Suchet and Michelle Dockery. Here’s the link to one of my posts about the series.

So US Shakespeare fans don’t have long to wait now, and can look forward to the series in the fall. So hotly anticipated have these been that some @HollowCrownFans have purchased the European DVDs and a DVD player that will play them specifically to take a look at the series.

From the Globe’s production of The Taming of the Shrew

There is of course a good deal of Shakespeare on stage this year, but don’t forget that there are also several stage productions to be seen in cinemas. Three plays from the Globe’s 2012 series are being screened: Henry V, Twelfth Night (with Mark Rylance and Stephen Fry, which was a huge West-End box-office hit last winter), and The Taming of the Shrew. Screenings start in June, but some of the dates and venues (especially those in the US) haven’t been confirmed yet. Full details can be found here.

The most exciting event of this kind is to be screening of the National Theatre’s current, highly-praised production of Othello which is to take place in September.  Booking is already open, and check here for dates and venues.

This entry was posted in Legacy, Plays and Poems, Shakespeare on Stage and tagged @HollowCrownfans, Henry V, National Theatre, Othello, Shakespeare's Globe, The Hollow Crown, The Taming of the Shrew, Twelfth Night. Bookmark the permalink.

3 Responses to Shakespeare, the BAFTAs, and screening theatre