In April the Painted Room in what used to be the Crown Tavern, at 3, Cornmarket, Oxford was temporarily re-opened. It’s remarkable that this room has survived, but even more astonishing is the coincidence that it is thought that Shakespeare may have stayed in it. The story that Shakespeare stayed with the family of John Davenant is a very early one. The Elizabethan wallpaper was preserved behind later oak panelling, and only found in the 1920s. Because the room was so magnificently decorated, is has been assumed that it was the one used by this distinguished guest. The painting itself dates back to the 1580s when the building was occupied by John Tattleton, a tailor.

The Crown Tavern was run by John Davenant and his wife Jane. Their son William, born in 1606, was probably Shakespeare’s godson, and Davenant was happy to be “thought his son”, though this is unlikely to be true.

John and Jane Davenant were both Londoners whose own parents came from elsewhere in the country, taking advantage of the opportunities afforded by life in the capital. They married about 1593 and lived close to the playhouses on the South Bank. John and his father were both merchant vintners, importing wine from the continent, and had links with the Muscovy Company, trading with Russia and Persia. None of their first six children survived and perhaps this is why, during 1600 or 1601, they left London for Oxford where they had seven children, including William. Their connection with the South Bank of the Thames where many of Shakespeare’s plays were performed may explain why, on his journeys between London and Stratford, Shakespeare chose to stay with the family. 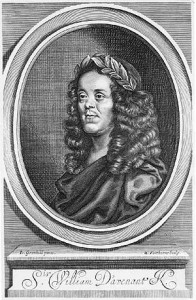 William Davenant’s parents died in 1622, when he (one of seven surviving children) was 16. William was provided for in his father’s will, being apprenticed to a London merchant. Davenant, however, had other ideas, joining the households of a series of nobles and taking up writing. He was talented: his plays gained the attention of Queen Henrietta Maria and in 1635 he collaborated with Inigo Jones on the first of a series of royal masques, including Britannia Triumphans, in which the King appeared as “the glory of the western world”. The final court masque of Charles I’s reign, staged in 1640, was written by Davenant. During the civil war he continued to serve the King and Queen, being knighted in 1643. In the Commonwealth years he was briefly imprisoned in the Tower of London, but was released and made attempts to reintroduce public dramatic entertainments, including the first English Opera, The Siege of Rhodes. With organised entertainments frowned on it must have been his charm that kept him out of trouble.

On the restoration of the monarchy in 1660 Davenant was in an ideal position to be allowed to run a theatre. He and Thomas Killigrew were granted the right to open rival playhouses in London. Davenant’s new theatre, the Duke’s, gave him complete control and his leading actor was to follow Richard Burbage as the greatest tragic actor of his day, Thomas Betterton.

As well as his own plays, Davenant commissioned new work by writers such as George Etherege, but his first major adaptation was of Shakespeare’s Hamlet, in 1661. Even though heavily cut, it retained the play’s power. But Shakespeare’s plays were out of fashion. John Evelyn saw Hamlet, and commented that “the old plays begin to disgust this refined age”.

Refining and elevating Shakespeare’s plays meant, as F E Halliday says in The Cult of Shakespeare, “the essential thing was to get rid of the low comedy to which Shakespeare so often descended; obscenity was permissable, desirable even, but not vulgarity”. In 1662 he conflated two plays: The Law Against Lovers took the basic plot of Measure for Measure (without Mistress Overdone, Pompey Bum, and Froth) and added genteel elements from Much Ado About Nothing.

Lady Macbeth’s “unsex me here” speech needed some work.  Shakespeare wrote:
Come to my woman’s breasts,
And take my milk for gall, you murth’ring ministers,
Wherever in your sightless substances
You wait on Nature’s mischief! Come, thick Night,
And pall thee in the dunnest smoke of Hell,
That my keen knife see not the wound it makes,
Nor Heaven peep through the blanket of the dark,
To cry, “Hold, hold”. 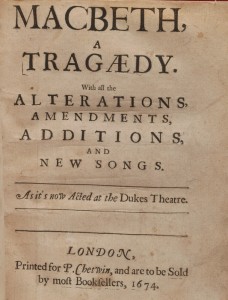 In Davenant, it becomes:
Come, and fill my Breasts
With Gall instead of Milk: make haste dark Night
And hide me in a smoke as black as Hell,
That my keen steel see not the wound it makes,
Nor heave’n peep through the curtains of the dark
To cry “Hold, hold!”

The words “dun”, “knife” and “blanket” seem to have offended the sensibilities of the Restoration audience.

In his book The Making of the National Poet Michael Dobson suggests that being regarded at this time as both as “an ignorant and archaic rustic”  and a “Divine Right monarch” was the first step in Shakespeare being adopted as the National Poet. Shakespeare’s flexibility has allowed his works to be endlessly adapted and rewritten while letting him develop into the country’s enduring cultural hero. This early, though, “Shakespeare’s plays belonged to the theatre more significantly than they belonged to Shakespeare”, and Davenant’s adaptations were driven solely by what was acceptable.

Davenant died suddenly in 1668, in his own theatre, and was buried in Poet’s Corner in Westminster Abbey. The slab above his grave contained the inscription “O rare Sr Will: Davenant”, a reference to the inscription nearby to Ben Jonson, who Davenant had succeeded as unofficial laureate.